Everyone has a story worth telling.

This impression inspired Neylan McBaine to found The Mormon Women Project, an online library dedicated to sharing the lived experiences of Mormon women around the world. 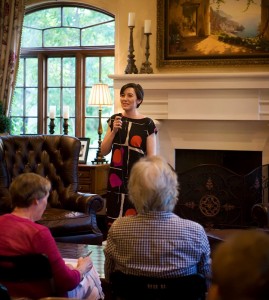 McBaine, a brand strategist at Bonneville Communications, a wife and a mother of three daughters and a lifelong member of The Church of Jesus Christ of Latter-day Saints, has proven to be a key voice in the dialogue on women in the church today.

Growing up in New York, McBaine remembers being surrounded by a rich diversity of Latter-day Saint women. From a seminary teacher who shared her love for diverse faiths and cultures, to her own mother, a working professional who never married in the temple, McBaine learned that there was no one way to be a Mormon woman.

McBaine began work on The Mormon Women Project in 2009. For a long time, she had been drawn to her vast network of women and the wealth of stories waiting to be told. But the moment that opened McBaine’s eyes to the need for such a project was when her Relief Society president in San Francisco left the church shortly after being released from her calling.

“For me, church has always been such a haven and a wonderful release where I could be who I really wanted to be,” McBaine said. “I was never raised to believe that I needed to rein in who I wanted to be because it didn’t fit with the church’s expectations of me, so that was really a wake-up call to me that not everyone felt that way.”

When The Mormon Women Project launched in 2010 and was met with enthusiasm from the public, McBaine realized she had hit onto a crucial need felt by women in the church to find themselves represented in the stories of other women. For the past four years, McBaine and her team have worked to include the narratives of women of all ages, nationalities, ethnicities and experiences. The collection offers more than 200 stories of faith, strength and agency from LDS women of all backgrounds.

“I think these stories give women real touchstones to look to in mapping out their lives,” McBaine said. “They help us see our own paths much more clearly.”

“By sharing these stories, other women can feel healed, find camaraderie and see a light at the end of the tunnel,” Knudsen said.

Knudsen herself experienced personal healing and heightened empathy in the work she did for The Mormon Women Project. In the project’s series on women who left and later returned to the church, Knudsen had the opportunity to interview her own mother.

“That was a really meaningful experience for me,” she said. “I had heard her stories before, but to have her sit down and go through her narrative with me for an hour helped me understand her spiritual journey in a way that I hadn’t grasped until that point.”

Knudsen further remarked on the unifying potential of the project.

“A lot of times, we see people who are different from us, and we put them in a box,” Knudsen said. “Once you know someone’s story, all of a sudden it becomes very difficult to put them in that box, and you find common ground and a shared humanity. That’s the power of these interviews.”

This is the ultimate goal of The Mormon Women Project and something McBaine believes is desperately needed in the church today.

“Something that’s important to realize about diversity is that it’s different, but it’s held together with loyalty,” McBaine said. “That, I think, is the most important thing we could learn as a church community today — the idea that first and foremost we are brothers and sisters. … We have shown a lot of disunity as we have mistaken diversity for disloyalty. I would love to see us get to a point where we as a community can say, ‘They are not like us, but they’re loyal to us.’”

Many have found help from that voice of “different but loyal.”

“As I have wrestled with issues of women’s role in the church, Neylan’s writing has provided insight and solace for me and for many women in the church,” said Robin Lunt, an attorney in Washington D.C. and the first woman interviewed for the project.
“The Mormon Women Project showcases diverse women who are doing great things and whose commitment to the gospel and relationship with God guide their choices and fuel their initiatives,” she said. “The project is a non-threatening space that makes it clear that faithful women can do anything and that there is not a cookie-cutter Mormon woman.”

Melissa McQuarrie, a copy editor for The Mormon Women Project, agreed that McBaine’s efforts have facilitated attitudes of empathy among women in the church.

“Her approach is unique in that she is showcasing a diverse group of women with different experiences, but under the umbrella that we are all LDS women with testimonies as well as struggles,” McQuarrie said. “She has fostered a divine sense of sisterhood.”

Looking to the future, McBaine hopes to initiate conversations and build relationships of mutual understanding between men and women in the church. On Aug. 28 she will release a book titled “Women at Church: Magnifying LDS Women’s Local Impact,” responding to the concerns of women struggling to feel included at church as well as those of leaders striving to better incorporate women. The book will make use of case studies and local ward and stake practices that show how women are being involved in innovative ways. The launch of a website, womenatchurch.com, where members can share their own positive experiences, will accompany the book’s release.

Knudsen commented on the power of McBaine’s unique approach in the church community today.

“Neylan has launched this perfect tightrope of being very empathetic and understanding of all these different viewpoints in the church but also standing firm in her belief that there’s more we can do,” Knudsen said. “Once we adopt empathy as our foundation, then we can sit and reason together and come up with ideas to make sure all women in the church feel loved, happy and fulfilled.”

For McBaine, change begins as each woman recognizes the value of her personal story.

“We all want to feel like we’re fulfilling our purpose, that we have a calling, that we’re doing what the Lord wants us to do,” McBaine said. “If a woman feels like there’s purpose to what she’s experienced in the past and that that experience has value, has strengthened her, has drawn her closer to God and has given her the confidence of feeling loved by Him, then she feels empowered.”