Junior running back Jamaal Williams is right where he wants to be. 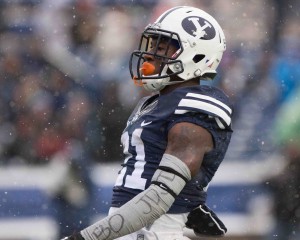 Earning his stripes as BYU’s go-to rusher for the past two seasons, Williams is now on track to become the the Cougars’ all-time leading rusher, needing 1,448 yards to surpass Harvey Unga for the top spot.

“I embrace it,” Williams said during BYU Football Media Day in response to the pressure on him to set the new record. “I feel like I can really do it.”

As a freshman Williams averaged 59.6 yards a game but nearly doubled his numbers his sophomore year with 102.7 yards a game, an increase of 172 percent.

If Williams keeps improving as much as he has then he will have no problem becoming BYU’s all-time leading rusher as a junior. And his coaches agree.

Knowing that Anae has said such things, Williams is determined not to let him down.

“It’s motivation. I want to make him right for what he’s saying, not make him wrong,” Williams said. “To have coach Anae tell people in advance that I can break it, I’m pretty grateful for it.”

While Williams and coaches both feel confident in his ability to set the new record, he understands that the team’s success comes before any individual success.

“At the end of the day I wanna be a team player before being a record breaker,” Williams said. “Records are good and all, but I want my team to be successful and not just me.”

But if the running game and the team are to be successful this year improvements must be made on the offensive line — a position of frequent criticism last year, as it failed to play consistently each week.

During the offseason Head Coach Bronco Mendenhall spent considerable time working the offensive line to make such improvements, and Williams has taken notice.

“A lot of big plays are happening in practices because of them. They got some tenacious motivation to go out and pancake somebody,” Williams said at Football Media Day. “As long as they pancake someone I feel good about it.”

But while Williams praises the work of the linemen, he puts in the effort to work on his own blocking ability. It’s not about being a one-trick pony; it’s about being a good teammate and pulling a fair share of the work load.

“If you were to ask him what he’ll get most excited about he’ll talk about blocking,” Atuaia said. “He’s done a great job in getting better at that and is progressing.”

Among the rushing yards record and improving as a blocker, Williams has even more goals in mind going into this next season.

“I’ve been working on my hands; I want to get more reception yards,” Williams said. “Also, I get more than seven rushing touchdowns and for the team to get 10-plus wins. I see this season going extremely well.”

Even without any praise, Williams looks forward to becoming BYU’s all-time leading rusher.

“It would mean a lot,” Williams said. “Just to have your name in a record book at college is great enough.”