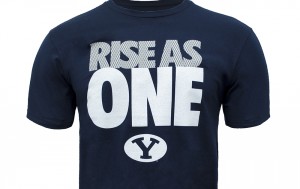 BYU football’s 2014 slogan “Rise As One” has expired before the season even begins because of a trademark issue.

Cougar fans who already bought merchandise with the latest slogan probably have a collector’s item on their hands, as BYU Store employees have pulled merchandise emblazoned with the slogan from shelves and online listings.

The most recent BYU football marketing course correction comes one year after the short-lived plan to have the words “Tradition,” “Spirit” and “Honor” on the back of players’ jerseys instead of being emblazoned with the players’ last names.

Chatter about the “Rise As One” slogan is alive on cougarboard.com, where a user noted on June 23 the slogan is also being used by Budweiser.

“It seems that Budweiser is also using the ‘Rise As One’ slogan in their advertising,” Cougarboard.com user Mogelijk wrote. “Can you imagine ESPN showing a BYU fan in a Rise As One t-shirt, then saying, ‘This game is brought to you by Budweiser. Rise As One,’ just before cutting to one of Bud’s Rise as One commercials?”

“We found out about two to three weeks ago,” he said, adding that it was a university decision to steer clear of the recently trademarked phrase.

Budweiser’s parent, Anheuser-Busch, filed a trademark registration for the slogan in August 2013 and unveiled the Rise As One campaign in March 2014 as part of its global World Cup marketing. The campaign, produced in conjunction with FOX Sports 1, includes a six-episode soccer series showcasing inspiring stories in sports. It encouraged fans to “rise as one,” “believe as one” and “celebrate as one” with Budweiser beer. The website riseasone.com is also part of the beer brand’s World Cup marketing.

But before Anheuser-Busch used the slogan to promote sporting events, Nike also had a “Rise As One” campaign.

Nike launched its “Rise As One” campaign for the 2012 NCAA basketball tournament. This campaign focused on increasing school pride with the hashtag #RiseAsOne. Nike focused on six schools — Duke, Kentucky, Michigan State, Syracuse, UConn and Florida — by creating movie-style posters with the “Rise As One” slogan.

Tittle said it is common for short catch phrases to make the rounds in the world of sports. “There are a lot of things people use over the years.” There is no indication Nike trademarked the phrase during its 2012 campaign.

An Anheuser-Busch representative told The Universe on Monday they knew nothing about BYU’s plans to use the slogan but weren’t behind any initiative to shut it down. “To the best of our knowledge no one from Anheuser-Busch InBev has contacted the university on this topic,” said Laura Vallis, director of global external communications at Anheuser-Busch InBev.

Customers trying to order the game day t-shirts have been frustrated with out-of-stock signs and the promise that the shirts will be coming in soon. Tittle said the athletics department will likely use “Rise up” as it re-brands its 2014-season promotions.

In last year’s announcement about team jerseys, the decision to put “Tradition,” “Spirit” or “Honor” on the back of each jersey didn’t sit well with either players or fans.

After the uniforms went public, BYU football coach Bronco Mendenhall said he got “back to my office to see a voicemail blinking from the athletic director.”

“You know how you might get your wife something for your anniversary and you think you’ve done a great job and you can’t wait for her to open it and then you get that look like that wasn’t such a good choice? That was kind of the way I was feeling at that point,” Mendenhall said.

Mendenhall called a team meeting and asked players how they felt.