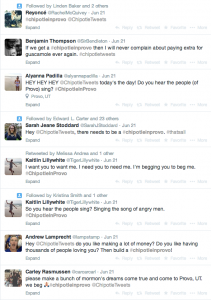 Some BYU students recently undertook a social media campaign to voice their wishes for a Chipotle Mexican Grill in Provo.

Chipotle does not franchise restaurants, however, and it has a specific criteria for opening a store. Requirements include a strong population and offices, universities and retail stores in the area that generate activity.

“It takes more than great-tasting food to make a terrific meal. It takes an awesome location and eating with fun, interesting people,” the company states on its website.

Provo fits the bill, but there’s a catch. Chipotle requires parking space for customers and accommodations to allow a liquor license for beer and margarita sales. According to Provo city code, a beer license requires annual applications and fees. The parking requirement may also be an issue with constant construction and limited spacing citywide, but these barriers don’t stop Provo students from making their voices heard. They are using Twitter hashtags and social media strategies to get attention from management.

This Chipotle pull is a prime example of recent trends in social media marketing, where companies thrive on their fans promoting the brand at little or no cost to the corporation. They make the food; the customers post it on Instagram. From staging hoaxes to offering incentives, businesses use social media to increase followers.

Fanfiber is a global online merchandise company with a blog-style website that teaches businesses how to grow and engage their fanbase and followers. In its article “Fan Engagement: The Cornerstone of Your Social Media Strategy,” Fanfiber describes traditional and social marketing and the influence of quality engagement.

“The reality is that, no matter how many followers see your post, only those who take further action are truly engaging with it. Fans are central to any brand as the driving force for long-term growth,” the website explains.

Edwin Huertas, vice president of web marketing company MH&A, LLC., has spent 15 years studying the world of business and fan engagement. He understands the power of words, the hashtag revolution and the effect of mobile, hands-on marketing tools.

“The probability of your tweets being retweeted are also higher when you use the right hashtag to share your comments or insights about a subject. People have a natural desire to share these useful insights. Given such a powerful tool for initiating conversation and soliciting engagement, the natural next step is to use these hashtags to market products and services using the Twitter platform,” Huertas says.

Once the social media conversations begin, the people control the airways. To be effective in social media marketing, users must master the 140-character count in order to say exactly what they mean. But who starts these conversations, and how long do they last?

“The real-time nature of social media means that brands can be at the heart of conversations amongst their fans, and the most successful brands are those that take notice of what their fans are saying,” Fanfiber said.

Successful companies not only know who their fans are but also what their fans love. Chipotle has already used social media successfully to increase its fan base.

Tim Robinson, founder and managing director of TMR Media Services, specializes in social media marketing. Robinson previously worked as a publishing director, campaign manager, communications vice president and chief marketing officer for a variety of brands and corporations. He noted that Chipotle has a mature social media presence, which took years to develop. Robinson tipped his hat to Chipotle’s creative community director for starting a Twitter hoax that earned Chipotle 4,000 followers in one day.

In July 2013 Chipotle’s Twitter account appeared to have been hacked. The company apologized for the mishap, but it was exactly what Chipotle wanted or even planned itself.

The confusing tweets were part of Chipotle’s 20th-anniversary online scavenger hunt, but more people were focused on the humorous messages posted than on the game. The hoax, staged by the company but designed to appear like it came from someone else, is one example of the strategies businesses use to grab media attention.

“It’s just a great example of the viral social effects of the Twitter platform, where a catchy idea can quickly generate a lot of interest and creativity,” Robinson said.

“BYU is a melting pot of students from around America, and everyone knows Chipotle, so there is already a fan base here. Everyone goes on dates, and everyone loves Chipotle,” said Kyle Shanklin, a BYU senior from Greenwood Village, Colorado, studying accounting.

Many of the #chipotleinprovo tweets were posted June 21 on “Chipotle Day.” This faux-holiday rallied Provo’s Chipotle lovers to get the media attention of Chipotle. Provo residents traveled to the nearest Chipotle, in Sandy, and documented the day on social media.

“Chipotle is happy and Provo is happy so they belong together. #chipotleinprovo,” tweeted Sarah Darby, a senior from San Clemente, California. The tweets ranged from serious to hilarious, while some were not so happy.

“If #chipotleinprovo doesn’t happen at this point I’ll be the most depressed girl,” wrote Calley Mortenson, a sophomore from Chandler, Arizona.

The effort reached more than 20,000 people, according to online analytics research by Shanklin, one of the event organizers. Shanklin started the campaign via Facebook, in partnership with BYU students Andrew Lamprecht, Ashley Holt and Scott Barton. Leaders of the blitz contacted Chipotle media representatives and managers about the hashtag revolution and the goals of the group.

Robinson did not fail to note the innovative nature of the Provo student campaign and its significance for Chipotle.

“This #chipotleinprovo campaign appears to be purely fan driven. It doesn’t seem to have hit the corporate screen, which is awesome,” Robinson said. “Corporate typically loves this sort of thing. It’s what they live for — fans engaging directly with their brand out of love and devotion. Think of it, generating a news article in The Universe about how much BYU students love Chipotle and corporate did literally nothing.”

Shanklin is confident the innovation brings the desired results.

“We know Chipotle heard our voices! We are still eager to see what they will say about it. Now, sometime in the not-too-distant future, Chipotle will be in Provo, and it will be due to each and every one of you,” he wrote on the Facebook page.