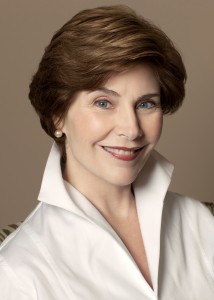 The mood of Laura Bush’s Freedom Festival speech was more relaxed after a woman dragged a protester out.

Laughter and applause welcomed the former First Lady as she began her speech Sunday evening, but appreciative gestures weren’t the only types of interruptions Bush had to cut through as she delivered her keynote speech. She had barely made it through her “thank yous” and “glad to be heres” before a man in the audience began protesting and insulting Bush at the top of his lungs.

“Your husband is a war criminal!” he repeatedly yelled. But Bush was unfazed; “I think we can keep going,” she said with a grin, paying no mind to the rude interruption. At this point, the protester screamed even louder, earning thundering “boos” from the rest of the audience and a “bear hug” from a woman sitting near him, who proceeded to singlehandedly drag him out of the stands.

As Marriott Center security and Secret Service agents caught up to the commotion, the protester had time for one last shout before being escorted from the building: “Whatever happened to freedom of speech?” It served as an appropriate introduction to Bush, as she exercised her First Amendment right to address the audience.

Bush kept the atmosphere light as she updated those present on the goings on in her family — her father-in-law, former President George H.W. Bush, recently celebrated his 90th birthday by going skydiving. Her husband, former President George W. Bush, is working on his golf game and his love for painting. And their daughter, Jenna Hager, just gave birth to their first grandchild, daughter Mila.

She prompted more laughter as she admitted to feeling like a pet cat as her family discussed what the grandchildren would call her; for reasons she doesn’t understand, they finally landed on “Mimi Maxwell.”

“And George just wants the babies to call him ‘Sir,’” she said.

The mood remained lighthearted as Bush described some of her most memorable moments as First Lady. Her first task when her husband took office was to establish her identity as a First Lady. She remembers being asked often by reporters, “Who do you want to be? Barbara Bush or Hillary Clinton?” Her response was always the same: “I think I’ll just be Laura Bush. After all, I’ve grown up with her and known her for quite a while now.”

A former librarian, Bush has a special love of books and learning. Her key platform as First Lady was fighting for education. She believes “every child in America should learn to read; literacy is an essential foundation to democracy; and that books have the power to not only move individuals, but also to shape history.”

Bush launched the first National Book Festival in Washington, D.C. early in September 2001— just a few days prior to the terrorist attacks, the events that would not only redefine her husband’s presidency but her tenure as First Lady as well.

As Bush described the events of Sept. 11 from a First Lady’s perspective, a somber spirit fell over the audience. She was on her way from the White House to Capitol Hill when a Secret Service agent informed her that a plane had crashed into the World Trade Center.

Later, she sat with Sen. Ted Kennedy in his office as they watched the events of that morning unfold. She remembers Kennedy’s effort to console her with a bit of small talk. Late that night, she and President Bush awoke when a group of Secret Service agents rushed into their room — another plane was headed toward the White House, and they had to rush to safety.

She was scared and confused as President Bush guided her blindly — there wasn’t enough time for her to put her contact lenses in — to a room deep beneath the White House in their pajamas. Once safe, they hugged and held their breaths, awaiting the loud crash of a plane meeting their home.

The crash, of course, never came; the plane was friendly, but the fear was real. And that’s when it really hit her: many Americans were not so lucky. Families had been destroyed, lives had been lost, and it fell upon her husband to respond.

The ensuing weeks, months and years were difficult. She had to “stand by (her) husband as he made the types of decisions every president dreads making.” And, as the protestor at the beginning of her address exemplified, they were slandered all the way.

“I am often asked, ‘How did you stand it? Didn’t it bother you, what people were saying about your family?’” Bush said to a now-silent audience. “‘Of course it bothered me,’ I tell them, ‘but it didn’t get to me: I know who I am, and I know who George is’; all that blathering is music to me now, or at least the clanking gears of democracy.”

Bush closed with one final memory as First Lady that she often reflects on. It was the opening game of the World Series in 2001, and her husband would be throwing the opening pitch.

It was what used to be the lightest of a president’s duties, but not anymore. The president would be all alone in the middle of a crowded stadium, surrounded by risk. He could be a target, and she could hardly breathe as she watched him walk to the pitcher’s mound.

When he stood on the mound, waving and smiling despite the danger, she had a thought: this is the job of a president, and presidents stand alone.

She concluded, “It’s the job of every American — Republican, Democrat or Independent — to stand up to his own pitcher’s mound and fight for freedom.”