A BYU student from Orem started a Fundly campaign to raise money to come home for the Fourth of July.

Nicolas Blosil, a 24-year-old business major, has been in India launching The KVM Foundation in Visakhapatnam and needed money for a flight back to the United States.

“He funded his way out there; now we are just trying to get him back,” said 26-year-old sister Chelsea Blosil. “It has all been sponsored.”

Raising money for a cause has its challenges, and adding the stress of time and deadlines can make it harder.

“We only have a few more days left,” Chelsea Blosil said. “We have eight days to raise the rest.”

Fundly is one of many fundraising and donation platforms to become popular over the past couple years. Others, like Kickstarter and Crowdfunder, have helped people raise thousands or even millions of dollars online.

Ryan King, a 25-year-old recent BYU graduate from Sterling, Virginia, used a crowd-funding platform to raise money for his band’s album. King said there are sometimes multiple issues you have to overcome to have a successful campaign.

“There seems to be a lot of strategy [to it],” King said.

He emphasized the importance of effective rewards or incentives for donations, spreading the word and saturation.

Nicolas Blosil co-founded The KVM Foundation in 2014 alongside fellow BYU student and friend Taylor Ottesen. Their mission is teaching people self-sufficiency and career preparedness. They offer courses in English to equip people with the tools to create better lives.

“English is becoming more of a valuable tool, especially in the business field, and they found as they studied the schools and how well English was being taught and being retained, that it wasn’t being taught in a way that they could use it help better themselves professionally,” Chelsea Blosil said. “It wasn’t adequately preparing them for the workforce.” 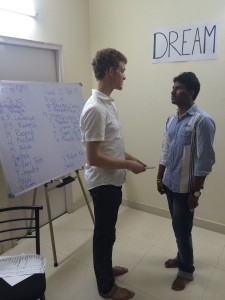 The curriculum teaches punctuality, professionalism, and even things as simple of confidence to help create the best future for their students.

Coleman Edwards, a 24-year-old student from Salt Lake City studying public relations, is band mates with Nicolas Blosil and said their band has been involved in raising money for The KVM Foundation.

“Our band, Red Yeti, is a partner with the organization. We played a show a couple of months ago to raise money and awareness for their cause, and it was a really special experience,” Edwards said. “Everyone in the company was so happy to be there and is really committed to, and believes in, their organization’s vision.”

The organization is funded through contributing donors and supporters.

“Nic has always been, and will always be, a visionary man — he finds out what he wants and he goes for it, no matter what,” Edwards said. “I think he wanted to go to India and change the world, and he just went for it. Now he’s using that same entrepreneurship mindset to complete his trip … [spreading] awareness of the organization and cause at the same time. Let’s hope he makes it home.”

To learn more about The KVM Foundation visit kvmfoundation.org.