Sunday turned out to be busy for the Provo Fire Department, which put out five fires by the end of the day. 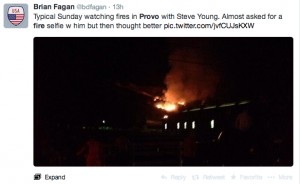 The first four fires suspiciously broke out along the Provo River Trail, reaching all the way out to Geneva Road and Utah Lake. These fires are suspected to be acts of arson, the fire department already launching an investigation with a set of suspects. The fires were quickly put out, preventing them from spreading into any residential or rural areas by the lake.

Late last night firefighters responded to yet another fire unrelated to the river trail fires. Around 10:50 p.m. a fire broke out on 4800 N. Canyon Road, leaving close to 4,500 homes without power in northeast Provo.

“The power outage was caused by a failed static line near 5000 North and 600 East. The failed static line de-energized a substation feeding 4,200 customers and ignited a fence which started the brush fire,” said Provo Mayor John Curtis on his blog.

Only an acre of orchard land had burned; power to the area affected was restored by 1 a.m. Curtis was thankful to those who responded so quickly to the fire and the outage.

“Thanks to Provo Fire and Rescue for their quick response as well as Provo Power and Provo PD,” he said.