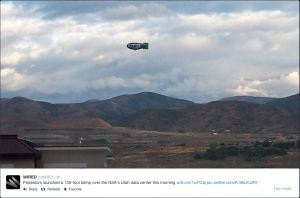 Commuters passing Bluffdale between 6 a.m. and 7 a.m. on June 27 looked up to see a surprise. Protestors piloted a 135-foot blimp above the Bluffdale NSA facility. The words on the blimp read, “NSA, illegal spying below” with an arrow pointing down. 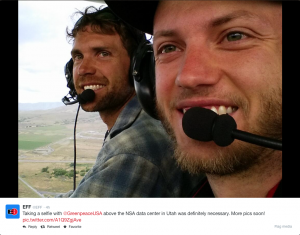 They’ve created an anti-NSA website called Stand Against Spying. Constituents can enter their street address to view their representatives’ anti-spying grade. Political representatives receive grades ranging from A to F, based on their support or opposition for acts like the USA Freedom Act, the Massie-Lofgren Amendment and the FISA Transparency and Modernization Act.

A helicopter accompanied the blimp to photograph the event. Previous speculation alluded that the Hill Air Force Base sent the helicopter to escort the blimp down. 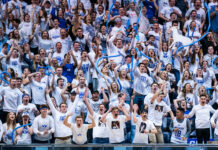