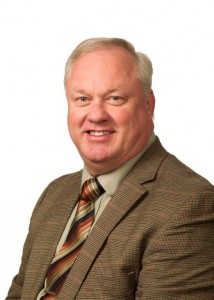 The BYU College of Nursing’s associate dean, Kent Blad, takes every opportunity to teach nursing students how to care for the nation’s veterans, a curriculum he helped create at BYU and that is now being adopted by other nursing schools around the U.S.

Before getting married he joined the military and served in the Army National Guard as an operating room technician. Once he became a nurse he was commissioned as an officer.

He served in the military for 10 years and in Operation Desert Storm for six months. After his service he received an honorable discharge to spend more time with his family. He went on to work with the Veteran Health Administration in Utah for 13 years in the surgical I.C.U and then continued working part-time for 12 more. After all this it’s easy to see why Blad is so passionate about veteran care.

In 1999 he started teaching as an assistant professor at BYU and is currently the associate dean of the College of Nursing. He began teaching critical care nursing and was soon teaching a global health class focused on caring for veterans.

Up until 2012 the BYU College of Nursing was the only known nursing school with a veteran care curriculum. After the “Joining Forces” campaign was launched by the government in 2012 other nursing schools decided to take up the call. Several colleges of nursing around the United States have since initiated programs with a focus in veteran care.

Blad, together with Ron Wing, another faculty member of the College of Nursing, have helped other nursing schools set up their veterans programs. They have already presented two webinars and four national conferences and have been invited by several independent nursing schools to consult on their programs.

“Our focus is how to educate students on military and veteran culture. Our motto for the class is, ‘To know them is to care for them better,’” Blad said.

Blad explains that students at the BYU College of Nursing have the chance to travel back to Washington D.C., where they spend a week learning about veteran care.

The students spend time at the Walter Reed National Military Medical Center speaking with wounded warriors and talking to those caring for them. They also visit the flagship VA hospital, Arlington Cemetery and the Pentagon, where they meet with Senator Mike Lee.

“We visit the Tomb of the Unknown Soldier as well, and we’ve presented a wreath there for the past two years,” Blad said.

Along with these memorial sites the students also sit down with Holocaust survivors and liberators to help the students gain perspective from their experiences. Blad explained that by exposing the students to veterans it teaches them about the character and make-up of the veteran population so they can later go out and better serve those in their care.

There are approximately 24 million veterans in the United States, and only about 8 million of them receive care from the VA. Blad wants to make sure students are prepared, telling them that no matter where they get a job after graduation they will end up caring for a veteran.

Beginning in Fall 2014 the College of Nursing will implement aspects of veteran care into its others courses, and Blad soon hopes to integrate it into all classes.

HFAC gears up for final performances before move to new building