There has been much speculation over why Apple spent $3.2 billion on Beats Electronics, one of the most popular headphone manufacturers in the nation, and Beats Music. The release of the two patent applications suggest that Apple will be developing headphones with self-adjusting noise cancellation and the ability to pause music when they are taken out of the user’s ears. 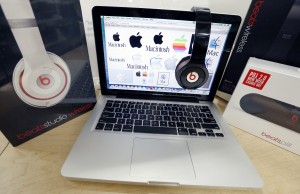 The “Ear Presence Detection in Noise Canceling Earphones” patent application would protect Apple’s rights to headphones that sense being removed from an ear and have the ability to adjust noise cancellation though sensors.

One of the prime benefits of adjusting noise cancellation listed in the application is wasting less battery than traditional noise-cancelling headphones.

“I think that would be great for me,” said Andrew Taylor, a master’s accounting student. “I don’t really care about the battery situation … but for me personally the adjustable noise cancellation would be a benefit.”

Taylor, who uses his noise-cancelling Beats while running, pointed out possible safety benefits that may come along with adjustable noise cancellation. With his current headphones, he cannot hear when people yell out to him on the trail to warn him they are approaching.

“Up on the trail there isn’t a ton of noise, so I don’t need the full level of noise cancellation that my headphones have,” Taylor said. “If someone was coming up behind me and was able to warn me, that would be a lot better.”

The  concept behind the “Electronic Devices and Accessories with Media Streaming Control Features” patent would complement the new headphones proposed. The technology in this patent would allow music played on a device to stop as soon as users no longer had headphones in their ears. Apple’s development of headphones with accurate sensors are  pertinent to the success of “this pause feature.”

This statement makes very clear that the feature would not only be compatible with music downloaded from applications such as iTunes but also with music streamed online. This is significant as Apple acquired Beats’ successful music streaming subscription service the day before filing the patent.

“I think that this is an interesting idea, and I definitely know people who would want that,” said Tommy Williams, a linguistics major from Gaithersburg, Maryland, who currently works at an electronics store.

There has been much speculation surrounding why Apple purchased Beats. Beats is best known for its stylish headphones that have found popularity among athletes and celebrities, but many technology journalists believe Apple purchased the company for its revolutionary music streaming service.

“Beats Music is a subscription streaming music service that focuses on providing a personalized music experience for each user through a unique blend of digital innovation and musical passion,” Apple said in a press release.

“I think that (the technology described in the patent applications) will probably be incorporated into the next few lines of Beats, and that will be its test run,” Williams said.