The Clawsons sit down for dinner with their 1-year-old daughter Daisy almost every night. Their two-bedroom apartment is the first in the duplex of singles housing they manage just a few blocks away from BYU campus. Ben Clawson, the husband, is a corporate trainer at Progrexion, a credit consulting firm in the area. His wife Lindsey recently graduated from BYU with a degree in mathematics teaching.

The Clawsons are among hundreds of families migrating and settling in Utah each year, a trend officials say is contributing to the rapid population growth of the state.

As one of the fastest growing states in the country, Utah is predicted to double its population to 6 million people by the year 2060.

If projections hold, that number is currently projected to be at 3 million by the end of 2015.

The news about Utah’s growth came recently to lawmakers during an interim legislative hearing on Utah’s Capitol Hill.

Michael Christensen, a representative from the office of legislative research and general counsel, reported on Utah’s growing population to the committee of economic development. The committee requested the report in an effort to better understand the economic implications of Utah’s rapidly growing population.

According to Christensen, Utah’s quick population growth is credited to Utah’s high birth rate and overall net migration into the state. Currently Utah’s fertility rate is 2.4 children per woman, higher than the national average of 1.9.

A rate above 2.1 means a population is increasing. Rates below 2.1 indicate decreasing populations.

“If Utah continues to grow at its historical average rate, it will pass three states — Arkansas, Mississippi and Iowa — in population before the next census and will become the 30th most populous state in the nation,” according to the report filed by the state.

Population growth is expected to come with its fair share of growing pains for the state. Among other things, population growth will strain resources in a variety of areas.

For example, resources like land availability and water are at the forefront of minds in the Capitol, particularly with the western drought. Southern Utah, including the Washington County area, has had a snow runoff at 20–30 percent of normal levels, a concern to farmers who rely on existing irrigation systems. Northern Utah cities such as Orem and American Fork have current drought mitigation measures in place with snowpack levels at 84 percent of normal. To conserve water, the state hopes to reduce water use for each resident by 25 percent by the year 2025.

With four of five of the fastest growing counties on the Wasatch Front, there is also concern over Utah’s air quality in the future as more and more cars hit Utah roads.

“Our UTA bus system is totally inadequate. We have a good train system, but our bus system is awful,” said Rep. Lynn Hemingway, D-Millcreek. Hemingway suggested Utah expand its current UTA system to combat poor air quality along the Wasatch Front as the area grows. Utah mountains and lakes make it difficult to expand the highway infrastructure, and no easy way to reduce emissions in the valley have presented themselves.

Rapid growth is also shifting Utah demographically. Currently 8.4 percent of Utah’s population is foreign born, compared to the national average of 13 percent. As the population grows in the future, Utah’s racial diversity will continue to grow. 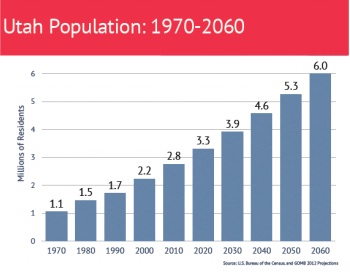 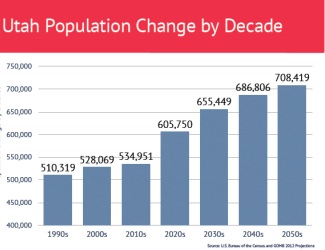