Anne Burkholder, the CEO of YWCA Utah, said the study indicates, “It’s much more than just one concerning issue. The reason we published this study was to prove just that, that women are still trying to overcome multiple problems in their everyday lives.”

The Institute for Women’s Policy Research and a Utah Advisory Committee conducted the study and released it earlier this year. The study provided “an overview of how women in Utah fare in key dimensions of their lives: earnings, education, and economic security; physical and emotional health and safety; and political leadership and participation.”

When it comes to work and earnings, Utah may have a greater share of women in the workforce than the nation overall (61.6 percent compared with 58.8 percent and rank 17th in the nation), but women’s median annual earnings are lower than the nationwide average. Utah ranks 47th among all states and District of Columbia.

The study also pinpoints that one in three Utah women 25 and older have either dropped out of college or not yet finished a degree. Women with education levels higher than their male counterparts are not only earning less but are more likely to be poor.

“It’s facts and studies like this that help me understand the importance of my education,” said Ashley Nelson, a former BYU student living in Provo who hasn’t complete her degree. “I know I need to get my degree if I want to compete with not only my female associates but the males.”

In terms of health, more than one third of Utah women have experienced rape, physical violence and stalking by an intimate partner. Utah’s female suicide rate ranks ninth among all states, and 17.6 percent of Utah women between 18 and 64 lack health insurance coverage. 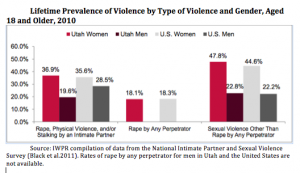 Another section of the study shows women’s participation in politics also ranks low among states. With no women in statewide elected office, no Utah women in Congress, and women only holding about 16 percent of seats in the 2014 Legislature, Utah ranks 45th among the 50 states and the District of Columbia.

Utahns have formed non-partisan organizations such as Real Women Run to help get women into politics and to raise awareness about the issue.

Deedee Corradini, founding board member of Real Women Run and the only woman to ever be Salt Lake City’s mayor, said, “We need more women serving in elected office and not just in the state legislature. To have not one single woman representing our state in Congress or in the executive branch is terrible.”

Burkholder said she believes that if women are flourishing then their families and communities will thrive and Utah will prosper.

“This study was not done to show that the women of Utah are weak, because they are not. The study was conducted to see how we compare to other states. If women have a better sense of what other women’s lives are like in other places, then they can work toward a change and improve their lives, “ she said.