This month marks graduation for senior BYU students, but as one thing ends, another begins. The looming question of, “What’s next?” haunts some and excites many. All different majors require various techniques of job hunting, and for students majoring in the performing arts, good auditioning is the key to success.

“A good audition is never wasted,” said BYU theatre professor and well-known actor and director Timothy Threlfall. “Even if you don’t get the part there is always something to learn.”

Threlfall prepares students for auditions and jobs using mock auditions for various character types. He thinks the more students train and audition, the more confidence they gain and the more comfortable they become, no matter the style or outcome of the audition at hand.

Threlfall also explained that auditions are ultimately a business transaction.

“Casting decisions are based on a hybrid mix of talent, looks, availability and about 100 other things that performers are never in control of,” Threlfall said. “Performers have to do their best and then walk away.”

Similar to job interviews, a performer may go to numerous auditions per week; there are various opportunities available in the performing world. However, instead of bringing one resume and looking for a certain type of job, a performer is constantly exploring new jobs or better said new characters. 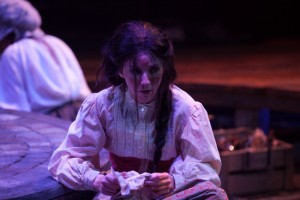 “You have to do your research for every part,” said BYU student and Young Ambassador Shae Robins. “In one week I auditioned for both ‘Mary Poppins; and ‘The Count of Monte Cristo’; those characters are very different, and I had to prepare for them in different ways.”

Always look for ways to improve

Robins also explained that performers train all of their life. Just as students go to college to study business or engineering, performers are constantly improving their skills by study and practice.

Casting director at the SCERA in Orem, April Berlin, shared some auditioning tips including what to bring and how to respond when a job offer is not extended.

“Every performer should bring a headshot and résumé,” Berlin said. “It is for the creative team to remember who you are and tell them about your qualifications. Performers should have several audition song options ready that show off their vocal range and skills. They should simply do their part, say thank you and then leave.”

Berlin explained that the audition is not a time to ask for critiques. She said to be open to new parts, because there is always something to learn.

“A good performer is willing to take time to learn,” Berlin said. “You might not get the lead or the part you wanted, but if you are willing to take a smaller part or be part of the ensemble, you will get experience, make theatre contacts and earn respect.”

Auditions are stressful and can be crazy, both in and outside of the theatre, between endless preparation and gauging what the directors are looking for. Overall, it is important to audition and to get experience in every way possible.

“Audition a lot, and keep trying,” Berlin said. “There will be rejection, but you never know what will be your big break.”