A mother-daughter team is organizing the first non-partisan Focus on Freedom event in Utah on Saturday, April 12.

The event will be held in the Clear Horizons Academy in Orem. Organizers Shelley and Rachel Pollock said Focus on Freedom is meant to be a day to celebrate and learn about the various forms of freedom people get to enjoy.

Rachel Pollock said the purpose of the event is to educate people on different aspects of freedom.

Neither Shelly Pollock nor Rachel Pollock are politically minded. Although one of the speakers will give a speech that touches on the United States Constitution, the event itself is not meant to be political in nature. 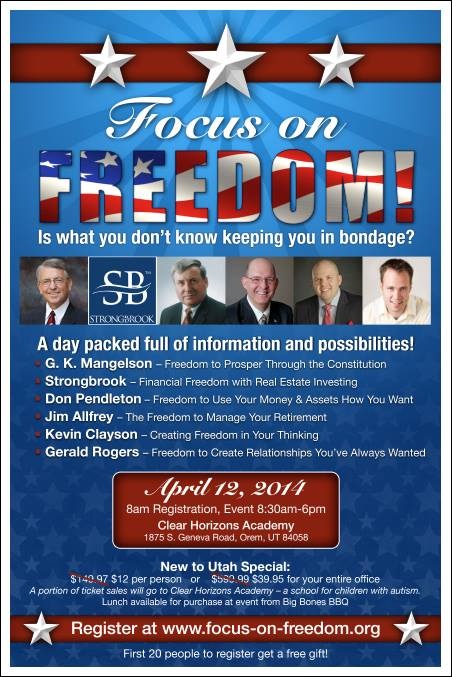 The event is less focused on political freedom than on general freedom. It will cover topics such as finances, relationships, real estate and retirement as well as steps to increase one’s freedom in these areas.

Although this is a public event, Shelley and Rachel Pollock hope to see BYU students participate and attend as well.

“We want students to experience that there are lots of possibilities out there,” Rachel Pollock said.

Event organizer Julia Graden said the event should not only interest students but also faculty and administration.

Shelley Pollock said what holds individuals back from accomplishing what they want is not knowing what is holding them back. She hopes this event will help people see the obstacles that prevent them from freeing themselves of life’s challenges.

Tickets are $12 a person, and lunch will be available for purchase as well. A portion of the ticket sales will go to Clear Horizons Academy, which is a school for autistic children.

“We have both worked with individuals with disabilities,” Rachel Pollock said. “Serving that population is something we’re really passionate about. They’re (Clear Housing Academy) doing amazing things spreading awareness.”

Focus on Freedom will be the first event the Pollocks have organized; however, they plan on organizing more events in the future.