“I think we’ve got some perspective about the loss,” BYU head coach Chris McGown said. “We’re certainly concerned, losing two here. Now we have to go on the road and play two tough matches again. We don’t want to finish the regular season with losses going into the playoffs, so we need to regroup a little bit and go to battle again this weekend.” 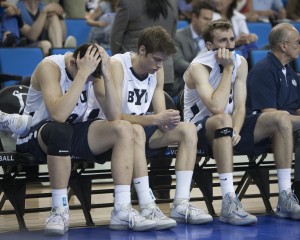 The first set BYU and Hawaii tied at 11 and again at 17. Hawaii soon jumped ahead with a 20-17 lead, but three errors on Hawaii’s side brought both teams to tie again at 21. Fourteen ties later Hawaii finally took the lead and the match at 37-35. This set alone Sander contributed nine of his 17 kills.

Hawaii’s momentum stuck in the second set. With two 6-1 runs they gained a 20-13 lead. Freshman Tim Dobbert brought a kill and a block to the table bringing the score to 20-15. BYU continued to close the gap getting within three points at 23-20, but that wasn’t enough to outweigh Hawaii who came out on top at 25-20.

“I thought [Hawaii] was the best we’d ever seen them play tonight,” McGown said. “They did everything right. We actually passed pretty well, but could never get it rolling offensively. Never quite got the breaks we needed.”

BYU travels to UCSB next Friday playing at 7 p.m. PST and then they venture to UCLA on Saturday at 7 p.m. PST.