This basketball season may have ended in the first round of the NCAA Tournament, but BYU basketball has a long history in the Big Dance. In 1980 BYU men’s basketball team drew a third seed, a feat that wouldn’t be repeated until the 2011 season. This story was published on March 10, 1980.

The 1980 BYU basketball season ended Saturday in the same manner it had started four months—a loss to a team, which, on the given occasion, it should have defeated.

For the second time in as many years the Cougars failed to reach the “Sweet-Sixteen” regional finals of the NCAA as guard Bill Williams and forward Larry Nance teamed up for 40 points in leading Clemson University to a 71-66, upset win over BYU in the Dee Event Center in Ogden.

Although this year’s defeat cannot compare to last season’s crushing loss to the San Francisco Dons, the determining factor can. 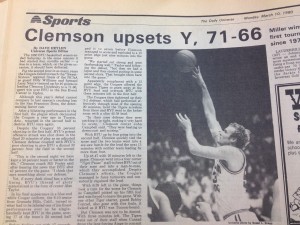 After a blistering performance in the first half, the plague which decimated the Cougars a year ago in Tucson, Ariz., returned in the second half to destroy BYU once again.

Despite the Cougars’ 55 percent shooting in the first half, BYU’s potent offensive attack was shut down in the final 20 minutes of play as an adjusted Clemson defense couple with BYU’s poor shooting to give BYU a dismal 30 percent from the field in the second half.

“This is the second night we have kept a 50 percent team or better in the 40s,” Clemson coach Bill Foster said after hearing the news that BYU shot 42 percent for the game. “I think that says something about our defense.”

Yet, if every dark cloud has a silver lining, BYU’s thread of glory materialized in the form of center Alan Taylor.

In his final appearance in a blue and white Cougar uniform, the 6-10 senior from Granada Hills, Calif., turned in what had to be labeled one of his finest performances ever as he single-handedly kept BYU in the game, scoring 17 of the team’s 24 second half points.

Before fouling out with 17 seconds left, the All-WAC selection amasses 27 points and 12 rebounds to lead both teams in each category. He hit his first seven shots in a row, and finished the game 10 of 12 from the field and seven of 11 from the free throw line.

His 12 rebounds extended his total to tie the BYU individual career record of 919, set by Cougar superstar Kresimir Cosic.

Coming out strong in the opening minutes of the game, the Cougars looked as though their bid to reach Tucson for the Far West Regionals would come easier than had been expected.

Sticking with their patented tip-off play—Taylor to Fred Roberts to Danny Ainge to the bucket—BYU jumped to a quick three point lead, upped it to seven before Clemson managed to score and exploded to a 13 point edge just nine minutes into the game.

“We started out strong and were fast-breaking well,” Taylor said following the defeat, “but then we had a lapse and they started putting in some second shots. That brought them back into the game.”

Apparently complacent with a 13 point edge, the Cougars allowed the Clemson Tigers to gnaw away at the BYU lead and overtook BYU with three minutes left in the first half.

The Cougars then tightened up their 3-2 defense, which had performed effectively through most of the opening 20 minutes, held the Tigers scoreless from their and BYU went to the locker room with a slim 42-38 lead.

“In their zone defense they were packing it in tight, making it very hard to score,” Clemson center John Campbell said. “They were beating us downcourt and scoring.”
With BYU up by four going into the second half, Clemson quickly tied the score and the two teams went into a see-saw battle for the lead the next 13 minutes with neither team leading by more than four.

Up 48-47 with 16 minutes left in the game, Clemson went into a four corner “Tiger Pause” stall to force BYU out of their zone an into a man-to-man, which they accomplished. Despite Clemson’s efforts, the Cougars managed to force turnovers and consistently regained the lead.

With 6:39 left in the game, things took a turn for the worse for Clemson as Campbell picked up his fifth foul and was forced to leave the game. With one other Tiger starter, guard Bobby Conrad, also gone with five fouls, it looked as if BYU was Tucson-bound.

But Clemson was not to be denied. With three minutes left, the Tigers went out of their stall when Conrad drove the lane forcing Ainge to commit his fifth foul of the afternoon. With Conrad hitting both his free throws, the Tigers widened their lead to three and increased it to seven before BYU could score.

Up 69-66 with one minute remaining, Clemson returned to their “Tiger Pause” and waited for the onslaught of Cougar fouls to come. In the final 72 seconds BYU committed five fouls, including Taylor’s fifth.

“There were a lot of tears shed in our dressing room and a lot were Frank Arnold’s and I’m not ashamed to admit it,” Cougar mentor Frank Arnold said following the game. “But it’s no shame to lose to Clemson. Let’s give them credit. Bill Foster did an excellent job of changing a few things that let them attack our zone better.

Of the eight Cougars who played, only the starting five scored, despite the fact that three reserves totaled 24 minutes of playing time. For Clemson, their four reserves accounted for 17 of their team’s 71 points.

Reaching double figures for BYU along with Taylor were Ainge, with 13 and Fred Roberts who scored 10. Scott Runia and Devin Durrant had eight apiece.