“We were a little sluggish through some of those sets, but I like the way we battled back and regained some composure,” said head coach Chris McGown. “Our guys did a really nice job of settling down and playing the way we know how to play.”

BYU’s senior outside hitter, Taylor Sander, claimed the title for BYU’s highest career kills in the rally-scoring era with 1,563 career kills, passing former BYU player Rob Stowell. His career kills also put him at No. 2 for all-time kills at BYU, 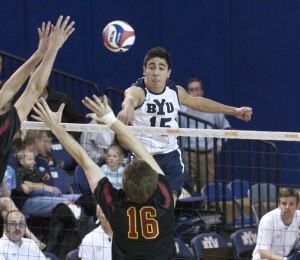 Sander led the night with 13 kills and three blocks with the support of Tyler Heap, who contributed 37 assists for the evening. Senior Devin Young hit a season high with 10 kills for the night along with sophomore Michael Hatch, who had five blocks and seven kills tying his career-high.

BYU has now won 21 matches in a row at the Smith Fieldhouse, and even more have not dropped a set on their home court since January.

Cal Baptist scored the first point of the match but then trailed the entire first set behind BYU, ending with a final score of 25-20 for BYU.

The second set both teams hung neck in neck until Cal Baptist ran away with a six-point run, putting the score at 17-14. After a time out, the Cougars put themselves back in the game, coming back to tie 21-21. Both teams remained within one point of each other until sophomore Matt Underwood sealed the set for BYU at 26-24.

The third set BYU again maintained a lead the entire match. With huge hits and blocks from Sander and a close-call save by junior Jaylen Reyes, BYU sealed the third match at 25-22, and the team walked away with a win.

BYU plays again next weekend in the Smith Fieldhouse for its last two home games of the season. The team will face UCSB on Friday at 7 p.m. and UCLA at 8 p.m.