“I thought we played well today,” said BYU head coach Lauren Jones-Spencer. “We played solid on a lot of the courts and stayed focused enough to pull out the win today. Marshall’s a good team. We did a good job of playing our tennis and came out on top today.”

BYU remain undefeated at home and counts this win over Marshall as its second win over a ranked opponent. 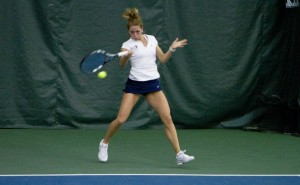 BYU took an early lead, with Meghan Sheehan-Dizon and Morgan Anderson-Littlewood winning 8-2 at No. 3 doubles. Momentum continued for BYU, with Savannah Ware winning in the fifth spot, and Littlewood took another win in the sixth spot, giving BYU an early 3-0 lead.

Marshall began to come back as BYU players Nicolette Tran and Sheehan-Dizon lost to both of their opponents in singles for the third and second spots.

But, turning the momentum back towards BYU, the freshman duo Toby Miclat and Mayci Jones won their set 8-7 in first doubles. Miclat and Jones also won against their singles opponents, securing the victory for BYU 5-2.

BYU will play again on Friday against Pacific at noon.

Results below are provided by McKay Perry, from BYU Athletic Communications: