After Tuesday’s big announcement, we dug up a story written right after President Samuelson’s inauguration.

“We love, appreciate and sustain you,” President Gordon B. Hinckley said after he presented Elder Cecil O. Samuelson with the presidential medallion Tuesday. “I formally charge you to go forward in leading this university to new heights of honor.”

BYU students, faculty and staff joined church leaders and honored guests to fill the Marriott Center for the simplified inauguration ceremony to formally install President Samuelson as the 12th president of BYU.

“So much has been done by so many,” President Samuelson said. “I am frankly embarrassed, but am constantly reminded that today is not about me. It’s all about this wonderful place and idea we know as Brigham Young University.” 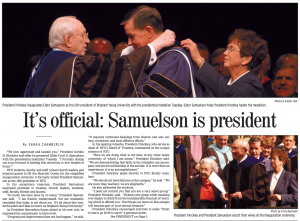 As President Samuelson forges ahead in his new role, he expressed his commitment to hard work.

“Progress and improvement does not just happen,” he said. “It requires continued blessings from Heaven and also our best, consistent, and most effective efforts.”

In his opening remarks, President Hinckley, who serves as chair of BYU’s Board of Trustees, commented on the unique mission of BYU.

“Here we are doing what is not done in any other major university of which I am aware,” President Hinckley said. “We are demonstrating that faith in the Almighty can accompany and enrich scholarship in the secular. It is more than an experiment; it is an accomplishment.”

“We should not have failures on this campus,” he said. “We are more than teachers; we are shepherds.”

He also addressed the students.

“I need not remind you that you are a very select group,” President Hinckley said. “Extend your grasp while reaching ever higher to drink from the inexhaustible fountain of learning which is offered you. The things you learn on this campus will become part of your eternal treasure.”

President Hinckley encouraged everyone to make “Enter to learn, go forth to serve” a personal motto.

“Mediocrity will never do,” he said. “You are capable of something better. Give it your very best. You will never again have such an opportunity.”

The entire audience laughed when President Hinckley made reference to a report by The Princeton Review that ranked BYU the No. 1 “stone cold sober” university in the nation for the fifth year in a row.

“I would venture to say there are many university and college presidents in the nation who would be glad to preside over an institution where they did not have to deal with the terrible problems of binge drinking and the train of evils that follow,” President Hinckley said. “What a satisfying thing it is to walk about these grounds and never see a beer can or cigarette butt or anything of the kind.”

President Samuelson said BYU exists because of students and that focus must be on their growth and development.

“We will try with confidence to be as good as the best in certain, careful selected areas,” President Samuelson said. “But we will not be detracted nor detoured from the fundamental charted course that makes our mission distinctive.”

No BYU devotional would have been complete without some reference to marriage.

“Hopefully, for each of you there will come romance,” President Hinckley said. “a partner true and beautiful, with whom you can share a life that will go into the eternities.”

“Make them your shining example,” President Hinckley said. “No salary you will ever earn, no fees you will ever be paid, will compensate for failure to live as you ought to live as a family.”

“I loved seeing President Hinckley speak about the school and seeing the other apostles and the great orchestra perform,” said Wayne Chang, a sophomore from Yorba Linda, Calif. majoring in business management. “BYU has been doing so great and this tradition of excellence is just going to continue with President Samuelson. I feel that there are all these worthy men being the presidents of BYU and that I can have complete confidence and trust in them.”

The Philharmonic Orchestra and Combined Choirs provided music for the historic event.

“It’s an exciting occasion for the whole university,” said Rosalind Hall, professor of music. “For these students to participate in it in this high-profile way is very exciting.”

“To repeat that with President Samuelson is really wonderful,” Staheli said. “It’s something I think we will never forget.”

The musical groups had only a short time to rehearse and prepare for their performances because of auditions, which took place last week.

“My greatest desire is that it will have great spirit, and that the spirit will make up for the technical issues that will surely be wrong,” Staheli said.

The music at the inauguration complimented the overall tone of the day.

“This is an event of great tradition,” Hall said. “When you see all the people come in their academic regalia, there’s a certain formal format. We are singing two great traditional hymns, which I think will really add to that feeling of heritage and formality.”

The inauguration lasted only one hour and let out on time.

“Today is not the time for explications,” Samuelson said. “it is a day to look to our future. I believe we see that future more clearly when we understand more fully our past and also the unique foundation of this great miracle of BYU.”