Nicholls State pitcher Grant Borne kept the momentum alive from yesterday’s nightcap, securing another win for the Colonels over BYU, 6-1.

The Cougars, now 7-10, fell behind in the fifth and sixth innings, unable to score a run even though the bases were loaded.

“We gave that game away,” said BYU coach Mike Littlewood. “It was a gift. We had some ugly, ugly moments, and our infielders couldn’t field a ground ball at times. We’ve got to get more on the offensive side, too.” 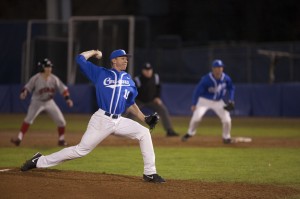 Littlewood said the team’s poor performance in the fifth and sixth innings “set the tone” for the next inning against NSU.

“Desmond (Poulson) threw well enough and didn’t lose his composure, but he hurt himself booting three balls in a row,” Littlewood said. “We wanted to limit his pitch count, so we pulled him when we couldn’t score the next inning.”

In last week’s game against Utah, Littlewood said they wanted to limit Poulson’s pitch count to 80 pitches. Tonight’s loss was Poulson’s first one of the season.

The only score by BYU happened at the beginning of the game, when Brennon Lund ran home and Brock Whitney hit a double. Jarrett Jarvis, who continues to extend his winning streak each game (now 14 games), hit a single out to center field in the ninth.

BYU, now done facing the Colonels, will head to Dallas Baptist University (11-4) to play on Monday. The starting pitcher will be Hayden Rogers, and the game will be broadcast (audio and video) live starting at 3 p.m. (CST).