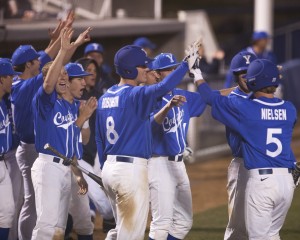 “I could command my fast ball and my curve was filthy tonight, it was moving a lot, I could throw it for strikes, but my slider was my out pitch tonight,” Mahoney said. “I started to feel it in the sixth or seventh inning. I knew it (the no-hitter) was definitely there going into the ninth and I wasn’t going to go for anything less.”

When Mahoney wasn’t pitching, BYU batters stepped up to score points for the team. Brock Whitney scored two doubles during the game and in the sixth inning, Jarrett Jarvis bunted the ball to load the bases. Jarvis has now extended his hitting streak to twelve games.

He made his way around the diamond as Trace Hansen hit a double out over left field, allowing Bret Lopez and Dillon Robinson to cross home base. Jarvis scored on Brennon Lund’s sac-fly, giving BYU a 4-0 lead over the Colonels.

“Everything was working,” Mahoney said. “Give a shout out to (Jarret) Jarvis, my coaches and our defense, it was sweet, just amazing.”

Tonight was the first of four games between the Cougars and the Colonels. The Colonels, now 6-7, only had two base runners, who walked in the fifth and seventh innings. They were unable to connect with the ball, which Mahoney pitched 90-92 throughout the game.

“He was throwing every pitch where he wanted,” BYU coach Mike Littlewood said of Mahoney. “I didn’t want to jinx him by getting guys up to throw in the bullpen. It was freezing. It was as cold as it was last Tuesday.”

Littlewood said he was happy with the team’s approach–a good one to have for tomorrow’s doubleheader in the continued set of games at NSU. The first of Friday’s two games will begin at 3 p.m. CST.