The LDS Church and its members got a lot of attention in the first couple months of 2014. Here are six big stories that got national attention. 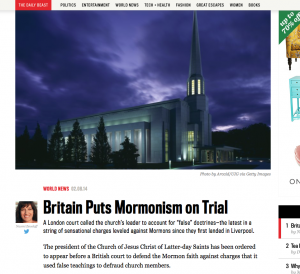 It’s not unheard of for former members to get angry at The Church of Jesus Christ of Latter-day Saints. But when a British man sued the Church for teaching “false doctrine,” a British magistrate surprisingly ordered President Monson to appear in court. It seems unlikely to go any farther than that, though.

Other media organizations who wrote about the story include the Arizona Republic, Huffington Post UK and The Washington Post. 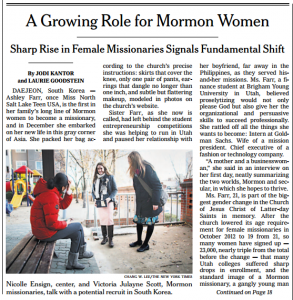 This story about the changing role of women in the Church ran on the front page of the New York Times. It prompted a response from the Church’s Newsroom, which characterized the article as “fair overall” but objected to the way it originally characterized the Mormon Women Project, and to the fact that Relief Society President Linda K. Burton only had a half-sentence-long quote. Interestingly, this may have been the first interview to a secular publication that Burton has given since she became president, according to Jana Reiss of Religion News Service. The New York Times published another article about Mormon women a few days later.

3. “Mormons Don’t Technically Get a Planet When They Die, Say Mormons” — The Wire 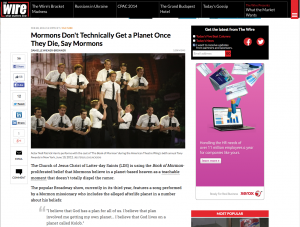 The LDS Church posted a 3,500-word essay to its website to counter the “cartoonish image of people receiving their own planets” most recently popularized by the Book of Mormon Musical. Media outlets as varied as the Associated Press, The Washington Post, and The Wire ran stories about it. 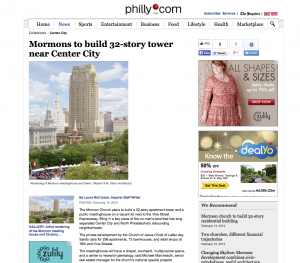 When the LDS Church and the mayor of Philadelphia announced the Church would build a 32-story tower to serve as a meetinghouse/family history center/residential apartment complex right next to the future Philadelphia temple, news organizations, from the Philadelphia Inquirer to the New York Times, picked it up. 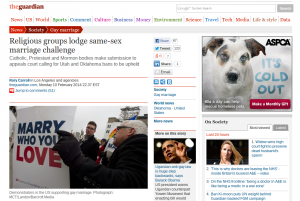 The LDS Church joined the U.S. Conference of Catholic Bishops to file an amicus brief supporting same-sex marriage bans in Utah and Oklahoma. The case continues, and dozens of groups have filed briefs on one side or the other, so the story has been picked up by papers like The Guardian, New York Daily News, Huffington Post and Los Angeles Times.