“The boys had great energy, and we’ve had some really great practices leading up to this game,” said BYU head coach Chris McGown. “To execute this well in a match was really satisfying for me.” 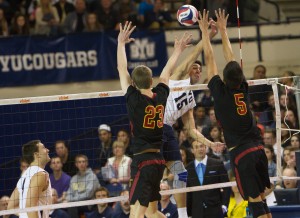 Along with his career-high 15 kills, Underwood had three digs and a career-high .542 clip.

“Obviously it was a team effort tonight, but it feels good to help out and do my best,” Underwood said. “We knew we could come out and compete.”

Taylor Sander added another 15 kills as well as game-high service aces and digs. Michael Hatch led the Cougars with five blocks, and Tyler Heap had a game-high 36 assists.

“The best part about tonight was our serve and serve/receive,” McGown said. “(USC) came in with a little bit of a different strategy to just try and put it on us and try and make us play. They held their service errors way down, but we did a really good job at the same thing. I thought we kept them out of the system all night.”

Underwood gave BYU a lead in the first set with a kill. The Trojans retaliated and kept a slight lead over BYU until their tie at 14. The Cougars had a 3-1 run, and two attack errors by the Trojans completed the set.

The Trojans opened the second set with a kill by Tanner Jensen. Sander came back with a kill of his own, and another kill by Underwood gave the Cougars a 4-1 lead. After three ties, the Cougars took the lead after a service ace by Sander at 16-13. The Cougars gained momentum after a long rally led to a kill by Devin Young, followed by a kill by Sander. Josue Rivera finished the set 25-16.

The third set was a battle for the lead, with neither team catching a big lead until two team blocks by BYU brought the set to 12-10. The Cougars kept the lead until an attack error by Sander tied the teams at 19. Rivera completed the 3-0 game with a kill at 25-21.

BYU will host No. 4 Pepperdine Saturday night at 7 p.m.