The Cougars picked up two more wins today in a doubleheader against the Redhawks at Bruce Hurst Field, winning 8-2 in the early afternoon and 4-2 in the nightcap.

BYU began the day using “small-ball” as a strategy to score six of its eight runs in the first inning. Then in the fifth inning, with the score at 8-1, BYU co-captain Brock Whitney got a groundout on Seattle’s Ryan Somer.

In the seventh frame, Trace Hansen was tagged out after having six consecutive hits in the series. BYU catcher Jarrett Jarvis continued his hitting streak, making it to 10 games now. 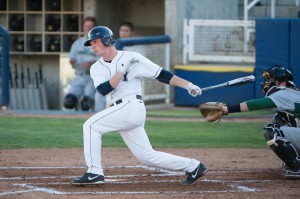 “Winning solves a lot of problems. It is really easy to pack it in, especially if things start not going your way,” BYU head coach Mike Littlewood said. “I really like the mentality of this week; it is so much better.”

BYU’s momentum continued into the nightcap as Whitney made it to third base in the third inning. Bret Lopez followed with a walk, loading the bases for the Cougars. Dillon Robinson hit a double play, putting BYU up 3-0.

Then in the fourth inning, the Redhawks put what would be their only two points of the game up on the board. BYU fought back in the sixth inning with a two-out high-bouncing ground ball which got Bronson Larsen past home plate. BYU got to a slow start in finding its pace, but came to mesh together this week at Bruce Hurst Field.

“In those first nine games we hadn’t been able to get a two-out hit,” Littlewood said.

BYU’s batting also improved to 4-8, outhitting Seattle 27-17. The Redhawks’ batting average fell to 5-6 when they had to begin the nightcap an hour earlier due to foul weather.

“Tip your hat to our team,” Littlewood said. “It’s hard to keep the mentality that you are going to play with rain delays. I love adversity. I don’t think it could get lower than it has been the past two weeks.”

The Cougars will now return to Provo, where they will host foe Utah on Tuesday, in a four game Deseret First Duel series. The game will begin at 6 p.m. at Larry H. Miller Field.