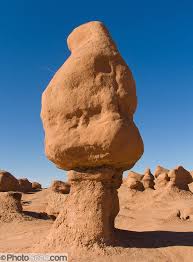 SALT LAKE CITY — A committee hearing marked a rocky start in the Senate for supporters and sponsors of a bill that would increase penalties for those who damage or deface natural resources in Utah State parks.

The bill aimed at securing higher penalties against state land vandalism was held in committee after House leaders decided it needed revisions. The bill follows national media attention this summer after men tipped over a large rock formation in Goblin Valley State Park.

The bill’s stiffest opposition came from the chair of the Natural Resources Agriculture and Environment Committee, Rep. Mike Noel. Noel had a hard time accepting bill provisions that could extend penalties of up to a third-degree felony.

HB68 also failed to distinguish between state lands and other public properties. “If a kid gets drunk, drives his car across the golf course and racks up damages of up to $5,000, will he be hit with a third-degree felony?”  Noel asked.

“I just think this is way too much. I’ll probably be voting against the bill,” he added.

Talking points revolved around how to determine the values of rocks like Goblin Valley’s.

“How do you determine the value of a rock that took millions of year to form?” Rasmussen said.

Rasmussen was unable to give a sure response but said estimates were at around $100,000.

Further rebuttals to the bill came from Rep. John Mathis who highlighted the word “any” in line 42 of HB68, which reads “any geological site or area.” Mathis argued that the term was too broad and could lead to difficult future interpretations.

Committee hearings on the bill were rescheduled for Tuesday, March 4.