It’s been almost a year since BYU student Tyson Anderson and his wife moved away from their Provo apartment, and he’s completely given up hope that his apartment deposit will ever be reimbursed.

The Andersons demanded that their deposit be refunded, but it’s been no use. His days of searching the mailbox for that elusive check are over and he figures it will never show up.

“We’re afraid to press the matter further because Utah courts favor homeowners in almost all cases,” Anderson said. He said that some bad-acting landlords  “have this power grip on tenants that really reduces our ability to stand up for ourselves.”

Students all over Provo have campfire-worthy horror stories of being cheated out of their housing deposits for reasons ranging from a few dusty blinds, damages they didn’t cause and everything in between. Not to mention the many landlords who have experienced their own share of debacles with dishonest tenants.

To the relief of renters all over the state, a new bill is working its way through Utah’s Legislature that will give renters the backing they need to get rental deposits returned. In fact, it was a complaint from a BYU student to her grandfather that got the attention of a lawmaker who wants to fix the rental deposit system.

Currently, landlords have 30 days to return a renter’s deposit, maybe with a few typical deductions for cleaning or damages. If the deposit isn’t returned in that time, the landlord may be subject to a $100 fine and court expenses. The renter can even sue the landlord in a small claims court. Few students, however, have the time or money to take their landlord to court.

Once taken to court, the prevailing party would not be required to pay the attorney’s fee and court fees, according to the proposed bill. The bill’s sponsor, Sen. Pat Jones, D-Salt Lake City, said it ensures that an honest party wouldn’t be kept from winning back their deposits because they can’t afford to take the issue to the courthouse.

“Most of the problem before was that [renters] can’t afford attorney’s fees or court costs, so they don’t do it,” Jones said.

This bill wouldn’t just be support for honest tenants, but would also provide honest landlords an opportunity to be treated fairly through the same process when they have abusive or unpaying tenants.

“Most landlords are good actors,” Jones said. “What this does is it weeds out the bad actors. It’s really a win-win.”

The bill would also help to inform each party of their responsibility, which can be especially helpful to young tenants and to “mom and pop” landlords.

“The abuse of landlords has been a ramped problem at BYU,” said Tara Rollins, executive director of the Utah Housing Coalition and a major player in the drafting of the bill. “Landlords were banking on not having a forwarding address to return the deposit. The bill gives clear guidelines for a tenant to follow in order to get their deposit back, as well as the landlord.”

Jones emphasized the bill is being proposed for the sake of every Utahn who has ever been ripped off in a rental situation and has asked, “What do I do now?” Especially college students. “I think it will really make a difference,” Jones said.

As for Anderson and every other student who has given up on ever getting that check back, there’s hope for the future.

“I know that there are a lot of honest landlords out there, and it’s only the horror stories that people hear, but those stories definitely are real.” Anderson said. “This [bill] is exactly the type of thing that is needed.”

The bill passed in the Senate by unanimous vote and is currently waiting for a vote in the House. 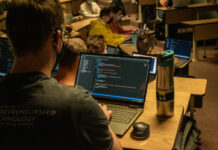