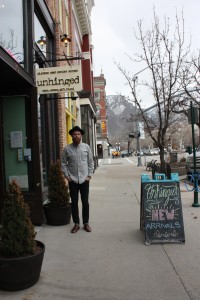 Employees of the Unhinged Boutique in Provo are not the only ones to notice panhandlers still sitting on the corner benches of Center Street. City and state officials are beginning to notice too.

However, Quinn Peterson, manager of Unhinged, said the homeless still loiter on the sidewalks outside his store asking for donations, regardless of the new law.

“They are still out there all the time. And when they come in front of our store, they definitely drive away business,” Peterson said.

Utah lawmakers are making a state-wide effort to curb this problem, and Provo residents are hoping to stand up in support.

“They will be standing right next to those signs … panhandling. It shows a lack of governmental control. If they are going to make law, they need to find a better way to enforce it,” said Kelby Gummersall, a BYU student.

Jim Nielson, R-Bountiful, is sponsoring HB101, which states that panhandling can impede traffic and create safety issues; as such, the bill would restrict panhandling on state roads or freeway ramps where there are no sidewalks.

In other major U.S. cities, officials have arrested panhandlers for nuisance crimes such as littering or jaywalking. However, Utah lawmakers want to take a more direct approach.

“I always think it’s better if the law addresses the situation at the heart of the issue instead of associated statutes that are not exactly where the concern is,” Nielson said.

Advocates for the homeless worry that fighting over roadside donations rules actually impedes finding a solution to the bigger issues.

“The money that the public gives in a vast majority of cases does not go curing anything related to homelessness; it goes to support addiction. And if that is what we reinforce, then that behavior becomes strengthened,” Rep. Nielson said. “They don’t get the help and the support they need to help them get over their core, underlying problems.”

Pamela Atkinson, a community advocate for the homeless, said she hopes this bill will encourage residents to support homeless shelters and organizations instead of panhandlers.

“It’s our job to educate the public,” Atkinson said. “There are alternative ways to give.”