When it comes to saving money on power bills, it is important to do the small things while students are young, according to Kat Linford, key account manager and energy efficiency coordinator for Provo City Power. She said students will establish good habits and be able to set a good example for their families.

Linford said she raises her own kids to turn off the lights because she was raised that way in her own home.

“If it’s ingrained in your brain earlier then it becomes easier to do that in your life going forward,” Linford said.

Linford said the key for students to reduce charges is to become educated now about how they are being charged and where the costs are. 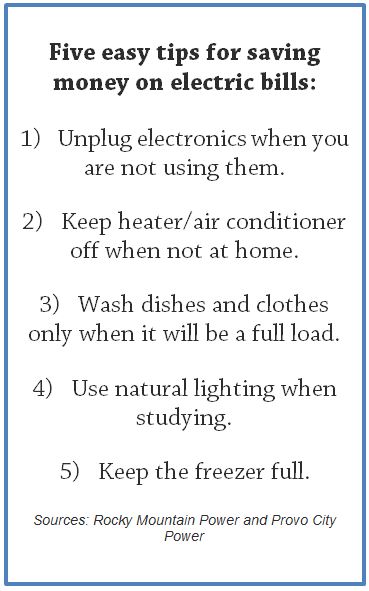 “One thing in recent years that we are finding is the problem with instant-on electronics,” said Margaret Oler, spokeswoman for Rocky Mountain Power.

Instant-on electronics allow a user to restart the device instantly without having to turn it back on and to wait for the whole system to launch.

“Turn those things completely off when you are not using them,” Oler said.

Linford said even though the DVR looks like it is off, it is still pulling power.

“If you keep electronic chargers in they will use a little bit of energy all the time. This is a hidden thing that people do not think of when using electronic devices,” Oler said.

Oler said one helpful idea is to plug a lot of personal electronics into a single power strip. When students leave for the day, they can turn off the entire power strip and then flip the switch back on when they return.

Linford said to try washing dishes in the dishwasher or washing clothing in the washer only when it will be a full load. She said air-drying clothes when possible will also be helpful.

Oler said being conscious of natural lighting can lower the electric bill even more.

“Open the blinds and let the sun come in and warm up your residence,” Oler said. “If it’s during the summer, cover the windows and close the blinds so that it blocks some of that passive solar.”

“Having it full and keeping frozen items in it will better keep it at temperature,” Linford said.

These are important but basic tips that can be easily overlooked. And when it comes to power in Provo, there is another interesting piece of information that is missed.

“Provo City is unique because it has its own power company,” said Val Hale, president and CEO of the Utah Valley Chamber of Commerce.

Only 15 percent of the U.S. population is served by private power companies like Provo City Power. Sixty-eight percent are served by larger investor-owned electric companies, according to a 2013 report by the American Public Power Association.

“Provo has some of the best power rates around,” Hale said.

Oler said students can visit the Rocky Mountain Power “Save Energy” website for additional tips on how to lower their monthly electric bills.