The energy in the Marriott Center turned electric Saturday afternoon as the BYU women’s basketball team pulled off its biggest win of the season, upsetting No. 15 Gonzaga 62-52.

Senior Jennifer Hamson had an 18-point second half to lead the charge for the Cougars, finishing with 20 points, eight rebounds and seven blocks. 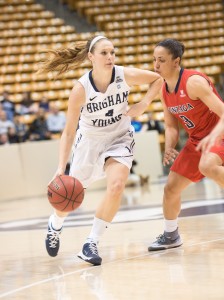 “Great game tonight,” said BYU head coach Jeff Judkins. “I’m really proud of our team, I thought they really played tough tonight like they needed to. Defensively, it was one of our best efforts. To hold a team like (Gonzaga) to 52 points shows that these ladies can really defend.”

Junior Morgan Bailey hit a three-pointer for BYU to open up the game, but Gonzaga went on a 10-0 run to make the score 10-3 after four minutes of play. After both teams battled back and forth, Gonzaga took the lead going into halftime 33-27.

The Cougars came out of the break with a fiery defense that drew a shot clock violation on Gonzaga for the first play of the half. After a scoreless four minutes, Bailey broke open the second half with a layup to put BYU within four, 33-29. Two free throws by Hamson at 14:15 evened things up for the first time in the game, 36-36.

Aggressive drives to the hoop by sophomore Lexi Eaton and strong play from Hamson helped the Cougars slowly build a lead, 52-47, with 5:20 on the clock.

“I love it when they play tight defense on me, because that means the driving lane is wide open,” Eaton said.

She finished the game with 15 points and also added a team-high 10 rebounds and went 7-8 from the charity stripe.

Senior Kim Beeston hit a crucial three-pointer to give the Cougars a five-point advantage 55-50, and they didn’t let up, outscoring Gonzaga 7-2 in the last three minutes.

“It was something this team needed — we’ve been waiting for this,” Judkins said. “It was a great atmosphere tonight. This was one of the first games in a long time that really felt like the crowd helped us.”

BYU was able to hold Gonzaga to a 15.4 shooting percentage in the second half, giving up just 19 points. The Cougars also outscored the Bulldogs in the paint 26-16, thanks to Hamson and Bailey’s strong post play.

Bailey finished the game with 14 points, and Beeston contributed eight points and a team-high four assists.

“This win puts us in a good spot for the conference tournament coming up,” Hamson said. “Gonzaga is ranked number one in our conference, but this proves that we are right there with them.”

The Cougars are on the road next week as they take on Pepperdine Feb. 20 at 8:00 p.m. MST in Malibu, Calif.