SALT LAKE CITY – On the first floor of the Capitol building, situated under the glass rotunda room floor and the dim light of Edison-era light bulbs, sat roughly 1,000 people, listening to one of the most energetic committee hearings yet of the 2014 Utah legislative session.

But these debaters aren’t legislators. They’re high school students, taking the stage to argue HB3431, a bill dealing with technology in their schools, in front of an audience of 900 fellow youth city council members, not to mention the several real legislators who might end up actually using these arguments in real committee hearings. 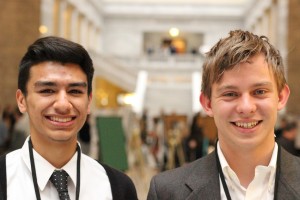 On Wednesday, Jan. 29, the Utah League of Cities and Towns held “Local Officials’ Day” at the State Capitol and the building was bustling with bright, captivated youth, like Joseph Smith, Orem.

“My mom always wanted me to know what was going on and eventually I developed a passion for politics and trying to make things better,” said Smith, 16, one of the mock-city council members debating the bill on stage.

“I think there needs to be more interest,” he said of today’s youth, “because, as far removed as it seems, it all ties back to our own lives.”

Smith isn’t the only who thinks that. Being in-the-know is a common theme among these youngsters; they feel empowered for it. And that’s exactly the case for Christian Sanchez, 17, a senior at Orem high school.

Sanchez says that kids nowadays aren’t paying enough attention to the news. And when they do, they latch on to stories about pop superstars rather than the goings-on that actually affect the world. “Like Ukraine trying to gain their independence from Russia or chemical spills on the East coast,” said Sanchez, “but [for them] the only thing going on is Justin Bieber.”

“I think we need to know more because it’s going to affect our generation and the future generations,” Sanchez continued. “And because [we’re] going to be the ones voting on things.”

And to some, the notion of having these kids being the voters and leaders of tomorrow isn’t such a bad idea.

“We want them as our leaders,” Carol Stilson said, as another group of these promising young adults hurried past. Stilson is a City Council member from Orangeville, Emery County, and has learned a thing or two from mentoring these youth.

“I think they can be a big influence on the youth around them just by their examples and who they are and what they want to accomplish in their life,” she said.

And that’s just what these community-concerned kids are doing, in hopes to spread their appetite for making the world a better place—especially to their buddies at home.

“Find what’s important to you and then see what’s going on with that because there’s always going to be something,” said Smith in heartfelt appeal to his peers.  “And once you have that passion, then you can build on that.”