A prayer from an LDS apostle, moving music from an African-American church choir, some words from the Senate president and a marriage proposal opened the 2014 Legislative session for the Utah Senate Monday, Jan. 27.

Elder D. Todd Christofferson, a member of the LDS Church’s Quorum of the Twelve, offered the opening prayer.

“Thou seest before thee Holy Father those who have sacrificed in political campaigns and efforts to secure the election to this body,” Elder Christofferson said in his prayer. “There is often agreement in ends and goals and often disagreement in means, we pray that thy will bless each one with wisdom with judgment, with discernment, with the blessings of heaven to be able to serve and improve the lives of every citizen of this state.” 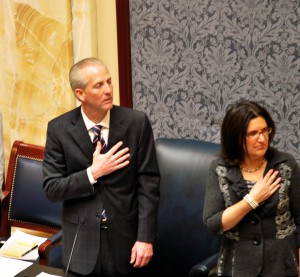 Following the prayer a military color guard presented the flags and the crowd in attendance stood in reverence, hand over heart as Ameyalli Nicole Cordova, a 12 year old student from Magna sang the national anthem. The Salt Lake Calvary Baptist Church followed the national anthem with beautiful renditions of “Amazing Grace” and “Battle Hymn of the Republic” sung in typical gospel fashion.

Senate President Wayne Niederhauser, R-Sandy, reminded senators of fundamental principles upon which laws are built.Niederhauser referred to the Constitution, the Bill of Rights, Declaration of Independence, the state Constitution, and some words from Samuel Adams and Alexander Hamilton.

Quoting Alexander Hamilton, he said, “To grant, that there is a supreme intelligence who rules the world, and has established laws to regulate the actions of his creatures; and, still, to assert that man, in a state of nature, may be considered as perfectly free from all restraints of law and government, appears, to a common understanding, altogether irreconcilable.”

This set the tone for the remainder of the meeting where the Senate informed the House that they were “assembled and ready to do business” at 10:56 am.

Once the House was informed, the Senate recognized their employees for their work and introduced the interns working for the Senate, several of which were from BYU.