SALT LAKE CITY — “Soon.” that is when the FDA is expected to release regulations on the e-cigarettes currently being sold throughout the country as health officials worry about how attractive the new devices are to teenagers.

“We’ve been hearing that for a while now, [the FDA] keeps saying ‘soon’. We’re excited and curious, but we haven’t heard anything at this point,” said Adam Bramwell, a spokesman from the Utah Department of Health.

Right now, e-cigarettes are regulated on a state by state basis and there is no national oversight, which is why the FDA is working on a nation wide regulatory plan.

“Fortunately, here in Utah with the help of our legislators, we have some good laws on the books,” Bramwell said.

An employee of Jeannie’s Smoke Shop in Salt Lake City said the only regulation their store has is that they can’t sell to minors; which in Utah is considered to be anyone under the age of 19. That might also change if SB12 passes the Utah Legislature. See related story here.

Limiting these flavors, said the employee of Jeannie’s smoke shop, would help in keeping these devices containing an addictive substance out of the hands of minors.

“The flavors and the nature of the device, gives it not only a cool factor but paints it as a toy. It gives you that attitude towards an extremely addictive substance, Nicotine, [which is] one of the most addictive substances on the planet, and is in that device,”  Bramwell said. 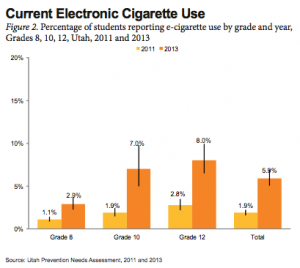 Between 2011 and 2013, the use of e-cigarettes among eighth, ninth, and tenth graders tripled in Utah, according to the Utah Department of Health.

“With us not knowing the long term health effects of the nicotine that’s in these products, or the products themselves, as a department of health, we can’t approve these things for population-wide use,” said Bramwell. “So, we will continue to regulate e-cigarettes as a state, and await FDA regulations.”