The phrase “Goblin Topplers” has become a well-known term in Utah ever since two Boy Scout leaders pushed over a rock formation in Goblin Valley October 2013. A video posted on Facebook of the incident went viral and eventually led to the dismal of the two Scout leaders and authorities considering charges against the pair.

As a result of this incident, Rep. Dixon Pitcher, has filed legislation, HB 68, to impose stiffer penalties on vandalism on state parks lands, with the penalty as high as $15,000 as a 3rd degree felony. While federal laws are on the books to prosecute vandalism on federal lands, state officials have found Utah’s law lacking when it came to prosecuting the “Goblin Topplers.” 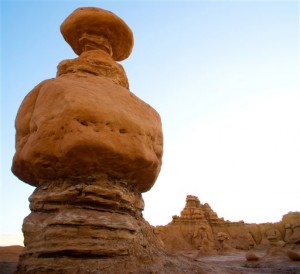 A rock formation in Goblin Valley. The action of three men has prompted a bill in the Utah Legislature. The men purposely knocked over an ancient Utah desert rock formation and posting a video of the incident online.  (AP Photo/Utah State Parks)

The bill was drafted in mid December and includes a definition of damage, defacement, excavation, permanent alteration or destruction of Utah Division of Parks and Recreation resources. The need for the bill punctuates an increase in vandalism in state and national parks.

Pitcher said that ironically social media has helped officials to catch many of the vandals. At the same time, vandalism to public buildings can be repaired, but defacing or destroying natural formations or dwellings of ancient inhabitants may forever destroy them for future generations.

“We could replace the outhouse,” Pitcher said. “You can’t repair this type of destruction (to natural formations).”

In addition, Congress has enacted laws to modify and strictly define what is vandalism and the penalties for destroying archeological resources. This includes the Archeological Resources Preservation Act of 1979 which gives the Department of the Interior the ability to enforce the preservation of rocks, Indian artifacts or lands, or any other archeological sites, with stiff fines for looting or vandalizing these antiquities.

According to the National Park Service website the fines range from $20,000 for the first offense to $100,000 for subsequent offenses. Additional fines could be assessed based on the value of a damaged site.

In 2010 the Department of Interior wrote a report to Congress detailing violations of the Archeological Resources Preservation Act and the damages caused. Between 2004 and 2007 there were 3,143 documented incidents of looting and vandalism on archeological resources on federal lands. This is on average 785 incidents per year. In 1985 there were 438 reports of vandalism compared to 701 in 2007.

Federal agencies also reported an average of $35,776 of fines levied, $111,544 in restitution payments ordered, and $250,411 in property seized from perpetrators per year. Also reported was the estimated cost of rehabilitation and repair to damaged archeological resources, at over $2.1 million.

The report, however, only covered federally owned lands. Utah lacks fines with the same severity as those on the federal level, which is why Pitcher said he is proposing what he calls archeological amendments.

“It’s a step up of the offense,” Pitcher said. “There was nothing that dealt with the destruction of antiquities.”

Pitcher also said that it is hard to put a price on fixing a toppled rock formation like the incident in Goblin Valley. Pitcher said that the proposed amendments would give a classification to this type of destruction.

There are numerous actions the Department of Interior has taken to prevent vandalism.

Matt Dyreng, a employee of the Bureau of Land Management Office in Moab, said state parks do numerous things to help prevent vandalism, and they are sure to clean up any vandalism as soon as possible; and that some areas of concern even have cameras or underground electronics

“We report [the act of vandalism] to the office,” said Dyreng. “And fix them as soon as possible to make it more comfortable for the respectful visitors.”

Dyreng, however, said he feels the greatest way to prevent any acts of vandalism is to educated people on the importance of Indian history and other archeolgocial sites.

“I do think that educating people about respect for the Indian culture, heritage and way of life will reduce vandalism,” Dyreng said. “We teach people about the importance of rock art.”