SALT LAKE CITY —  An Ogden lawmaker wants to raise the legal age to purchase tobacco from 19 to 21 while hoping to raise awareness about how to improve the health of Utah’s youth.

Sen. Stuart Reid, R-Ogden, said in an email.”Tobacco has no redeeming value for anyone, but particularly it is harmful to youth who are especially vulnerable to addiction–addictions that will assuredly lead to catastrophic illness and death.” 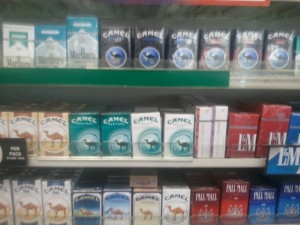 Utah convenience stores may face new regulations for selling tobacco to minors next spring if SB12 passes the Utah Legislature. The bill would up the legal age to buy tobacco products, such as cigarettes and chewing tobacco, to 21.

Reid, SB12‘s sponsor, said that he took on the bill at the urging of KSL radio talk show host Doug Wright, as well as many of his listeners. He is sympathetic to their demand for tobacco restrictions for all youth under the age of 21.

Reid and others who have worked on crafting the bill have the youth of Utah on their minds as they have worked out the details. Research shows that most underage tobacco access comes from older teens.

Beverly May, a Utah lobbyist who has worked with the sponsors in forming the bill, said, “We do know that a lot of youth get their cigarettes not, obviously, by going in and buying them in the store. They get them from 19-year-olds who will purchase the smokes or the other tobacco products and give them to the underage youth.”

Supporters hope by limiting access to those older youth, it will make it harder for the younger youth to get tobacco products. In turn,  they hope this keeps youth from starting to smoke. Reid and May both pointed out that delaying the onset of smoking until an older age usually leads youth to not smokie at all.

Of course, not everyone is in favor of the new legislation. Sen. Karen Mayne, D-West Valley City, challenges the effectiveness of the bill.

In an email, Mayne said, “We will let you die for our country and teach you to kill at 18. We’ll let you drive a deadly auto at 16. We will let you get married and take on the responsibilities of raising children. We will let you vote at 18. So, buying cigarettes at 21 rather than 19 will keep you from smoking? I struggle with this one. What good do you think this bill could do if it is passed? Make us feel good? Keep people from smoking?”

Reid also suggested that some may be opposed to the bill because youth between the ages of 19 to 21 are adults and should be able to make their own decisions about tobacco use, including harming themselves through its use.

In response he said, “Of course the truth is they don’t just harm themselves with their choices. Often they introduce other youth to use it, which leads to their addictions. In addition, all of us pay for the consequences of their use through health care and insurance cost when they become sick as a result of their choice to use tobacco that all agree has no redeeming value.”

Reid said Utah has the same age 21 restrictions for alcohol use and also Utah prohibits the use of illicit drugs. These restrictions to both drugs and alcohol he says are to prevent harm to the greater society, which he points out is the intent of his tobacco legislation.

May also suggests that retail stores and convenient stores might push back because they make a lot of money from the tobacco industry on product placement and placing their tobacco products. In response to those concerns,  19-year-olds who do smoke won’t automatically become criminals and would be grandfathered in under the bill. If the legislation is passed, the provisions would take effect in spring 2014 in Utah.