The Cougars topped off a win against San Francisco with a dominating performance against Santa Clara, sweeping the two Bay Area teams in a weekend of good basketball.

BYU was forced to play virtually the entire first half without the help of Tyler Haws, who gathered two quick fouls to start the game and was pulled with only 34 seconds gone in the first half. The West Coast Conference’s leading scorer wasn’t missed much, as the Cougars shot an impressive 32-52 from the field, including 7-11 from the three-point line, to carry the Cougars to a fifth-straight win, 91-81 over the Santa Clara Broncos. 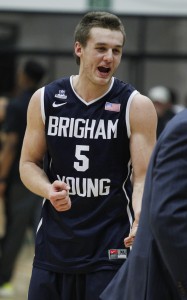 “I was just watching him, even when he was out on the floor,” said junior guard Matt Carlino. “He had a big night tonight; it was a really good spark for our team, and it was really good for us.”

Winder took control of the game midway through the first half, scoring 10 straight points for the Cougars, including two three-pointers that took the lead to 20-12 at the 10:10 mark. Winder would reach his career high on a jumper shortly after the Cougars took off.

With Haws on the bench, head coach Dave Rose needed the help from Winder and said the junior played fantastic.

“He bailed me out tonight,” Rose said. “Anson was just terrific. He played all 19 (first half) minutes, shot the ball really well and defensively he was just terrific. They were two for 13 from three at halftime, and a lot of that had to do with how Matt and Anson guarded their guys on the perimeter.”

Carlino hit a jumper from 20 feet out and made a free throw with seven minutes to go on a foul, crossing the 1,000 career-point milestone in only 81 games as a Cougar, one game ahead of former Cougar Jimmer Fredette. Not letting up, Carlino finished off a 14-to-2 run by the Cougars with his second of two three-pointers in the first half. Carlino has hit three three-pointers in each of the last three games.

“I think I’m pretty calm and relaxed right now,” Carlino said. I’m fine coming off the bench; I’m comfortable, and the team’s comfortable. I think I always want that moment when I can make a play, and when an opportunity arises, I’m quick to jump on it.”

The Cougars, who managed just five total assists against USF on Jan. 16, turned that around against the Broncos with help from Carlino who, off the bench, flirted with a double-double, scoring 15 points on 5-9 from the field, 2-3 from beyond the arc, nine assists and one steal. Carlino has shot 64 percent from the field the past five games.

“Matt’s numbers in the last three or four games have been so good, but that doesn’t really tell the whole story,” Rose said. “He has just been such a big part of the positive flow of our game.”

Turnovers plagued the Cougars through the first eight minutes of the second half, as the Broncos went on a 12-0 run to cut a 24-point deficit to 10 off threes from Denzel Johnson and Nate Kratch with 11 minutes to play. But it wasn’t enough.

Trending toward a blowout, the Broncos fought hard in the second half with the efforts of Jared Brownridge, who had a game-high 30, including four three-pointers. Brandon Clark also chipped in for the Broncos, adding 20 points and seven assists. But their efforts fell short as the Cougars extended the lead again and managed a double-digit advantage the rest of the way.

Haws continued his streak of double-digit-point games, scoring 16 all in the second half on 5-8 from the floor and a perfect 6-6 from the line. Kyle Collinsworth scored 16 and added seven rebounds for another solid performance.