The Cougars could not overcome a poor shooting night at the McCarthey Center in Spokane, Wash., falling to conference foe Gonzaga 68-42. 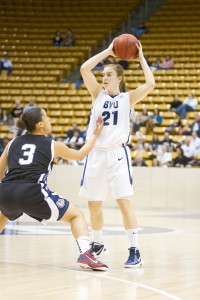 “We need to be more aggressive on offense and shoot more,” said BYU head coach Jeff Judkins. “Having Jennifer in foul trouble for most of the game hurt us in our defensive presence, and when that happens we need others to step up. We need to learn from this and get back to the fundamentals.”

The Bulldogs (13-3, 3-1) held BYU to its lowest point total of the season, well under its average of 73.5 points per game. The Cougars struggled with overall shooting, hitting 31 percent from the floor and just 14 percent from three-point land. BYU also shot 53 percent from the free-throw line compared to Gonzaga’s 70 percent.

BYU came out fighting after the break, but the Bulldogs went on an 18-4 run toward the beginning of the second half to make the score 50-29 and secure their lead. BYU made nine of 30 shots in the second half.

The Cougars will stay on the road for another league contest, facing Portland Saturday at 2 p.m. PST. The game will be broadcast on BYU Radio.