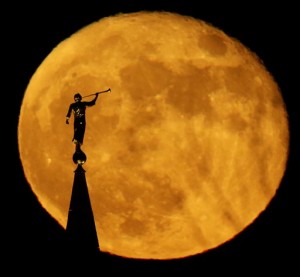 His family issued a statement Saturday saying he was diagnosed with a brain tumor in 2010, but the tumor was removed and he continued sculpting until the day he unexpectedly died.

His rendering of the Angel Moroni dons the spires of over 100 temples, according to the website of The Church of Jesus Christ of Latter-day Saints.

Worldwide, there are more than 140 temples, which are considered sacred to Mormons and are used for religious rituals.

Mormons believe the Angel Moroni led church founder Joseph Smith to the golden plates from which the Book of Mormon originated.

Quilter also sculpted the Memorial for the Daughters of the Utah Pioneers near the State Capitol and the life-size nativity scene that is displayed outside most LDS temples during Christmas time, his family said. He also sculpted many of the oxen that are part of baptismal fonts in LDS temples.

He became associated with the church’s temple department as a student at the University of Utah, and experimented with casting sculptures in fiber glass, which was much lighter than traditional bronze or other metals used to make the angels for temples at the time.

The lighter material made it easier to transport and mount the Angel Moroni sculptures atop LDS temples and they were more compliant with building codes.

Quilter’s daughter, Elizabeth Finlinson, told the Deseret News (http://bit.ly/1eCiCMx ) the sculptor also was a great family man. Quilter, who lived with his wife, Verna, in Holladay, also is survived by eight children and over 80 grandchildren and great-grandchildren.

“He would do anything for any of his kids,” Finlinson told the newspaper. “We just adored him because he took such interest in our lives.”