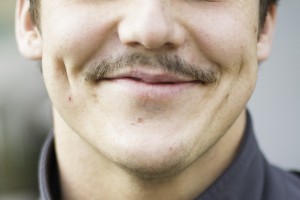 Many college-aged men excitedly abandon their razors when November rolls around, but for men at BYU, a cancer-awareness campaign endorsed by the American Cancer Society, No-Shave November offers little razor burn relief.

The Honor Code states, “Sideburns should not extend below the earlobe or onto the cheek. If worn, mustaches should be neatly trimmed and may not extend beyond or below the corners of the mouth. Men are expected to be clean-shaven; beards are not acceptable.”

With only the option of a mustache during “Movember,” many BYU men are taking the challenge, whether or not they can actually grow a nice mustache.

The ID center requires patrons to adhere to all of the dress and grooming standards when they come in for an ID card. Daniel Lynn, an international relations major from Riverton who works at the ID center, said they haven’t had to turn away many men for excess facial hair, but they have noticed a definite increase in mustaches during November.

The Testing Center employees have also noticed a higher number of mustaches this month but hasn’t had to turn away an abnormal amount of men with inappropriate facial hair. Employees attribute this to the Testing Center’s reputation for being strict on standards.

“I think most of the guys who are serious about No-Shave November will either not come in to the Testing Center during November or will keep their facial hair under control because they know we take the grooming standards very seriously,” said Kate Kearl, a pre-business major from Pocatello, Idaho, and a Testing Center employee.

Around campus, enthusiasm for No-Shave November is varied, and most of the supporters are male.

“I absolutely hate it (No-Shave November),” said Jessica Babcock, an elementary education major from Edmond, Okla. “I am just not a fan of facial hair … at all.”

Aimee Myers, a recreational therapy major from Sandy, agrees that No-Shave November is a no-go.

“I only like a little facial hair,” she said. “The boys think it’s cool, but they just look like mountain men.”

Other women, like Catherine Black, a public health major from Bentonville, Ark., have different reactions to facial hair. Black said she likes men with beards but isn’t as excited about mustaches.

Men’s opinions on facial hair, while more sympathetic, are varied as to the actual practicality of growing a mustache.

“I think mustaches are fun, but they usually don’t look good,” he said. “I was going to grow mine out this month, but I decided I didn’t want my social life to suffer.”