A broken heart is the best way to describe it. 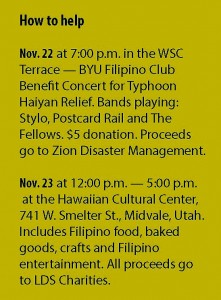 “These people — they were our lives. They were everything to us. Everything we did was for them… I will never be the same because of these people. So it’s just really difficult. A broken heart is a good way to describe it,” said Tori Powell, a 2013 BYU graduate who served in the Philippines Tacloban mission from 2009 to 2011.

When he first heard of a typhoon warning in the Philippines, DeeJay Pasikala said he “wasn’t that worried because the Philippines gets typhoons all the time.” But when news coverage began showing graphic images of destruction and death in his former mission, he started to worry.

“I’ve seen flood, and I’ve seen devastation. From what I’ve experienced, it was bad, but the Filipino people recovered. They’re very resilient,” said Pasikala, who served in the Philippines Cebu mission from 2010 to 2012. “It wasn’t until I saw pictures and heard stories on the news when I saw the devastation it caused. My heart just sank.”

When he realized the extent of the storm’s damage, Pasikala tried to reach families he knows in Bogo City, an area on the northern tip of Cebu Island that was severely impacted by Haiyan. He heard from one family Wednesday morning: “We’re not OK. Our house is gone. Please help,” the message came from a member of the Potot family, whom Pasikala baptized. Just days before Haiyan made landfall in their hometown, the family was sealed in the Cebu temple. Although they lost everything, every member of the family survived the storm.

Pasikala is just one of hundreds in Utah Valley who feels personally affected by the Category 5 storm that impacted seven LDS missions. The missionaries who served in them are grieving the ruin left by the storm and rallying to help in reconstructing the affected areas. The devastation of Typhoon Haiyan, known as Yolanda in the Philippines, swept the Visayan region of the Philippine Islands on Nov. 7. With a death toll of 3,976, and nearly 4 million displaced, the storm is the worst the Philippines have seen in 20 years, according to The Wall Street Journal.

Claire Ormsby, who served in Tacloban from 2010 to 2012, watched news coverage and recognized a city plaza where she used to run every day in her former mission of Tacloban, one of the worst hit cities affected by Haiyan. But now, the plaza was filled with body bags.

Helpless is another word returned missionaries from the Philippines are using to describe their feelings when they heard of Haiyan hitting their former missions.

“They’re your family,” Ormsby said. “And you feel helpless because you can’t do anything. … This was my home for 18 months. That’s what’s even harder, that that was my home and now, that home, doesn’t exist.”

Many returned missionaries expressed that they “just want to be there” and are organizing groups to travel to the typhoon-devastated regions and help in the rebuilding of the area.

Powell raised nearly $5,000 on Crowdrise as of Monday, which she plans to donate to the humanitarian fund of The Church of Jesus Christ of Latter-day Saints.

Others are also raising funds to donate to the effort. Pasikala and other returned missionaries from Cebu are hosting a fundraising event Saturday, Nov. 23, at the Hawaiian Cultural Center (741 W. Smelter St., Midvale, Utah) from 12 to 5 p.m. The event will offer Filipino food, baked goods, crafts and Filipino entertainment, all donated from the community. Admission is free, and all proceeds will be donated to LDS Charities, Pasikala said.

The BYU Filipino Club will host a fundraising benefit concert Friday, Nov. 22, at 7 p.m., in the Wilkinson Student Center terrace. The concert will feature BYU student bands including Stylo, Postcard Rail and The Fellows. Admission is $5, and all proceeds will benefit Zion Disaster Management, a group of Filipino doctors who will provide healthcare for victims of Haiyan in Tacloban, said Andrea Soleta, president of the BYU Filipino Club.

“We love the Filipino people, and even though our families are safe, the devastation that happened in Tacloban still breaks our hearts,” Soleta said. “We still feel like we’re connected with our countrymen.”

While many returned missionaries are making efforts to travel to the Philippines, The Church of Jesus Christ of Latter-day Saints encouraged members to pray for those affected by the disaster and consider increasing their fast-offering donations and donating to the Church humanitarian fund.

“The Church has a vast, local volunteer force among the members in the region (and) is not seeking volunteers to travel to the Philippines as part of its relief efforts. In addition, the Church has learned that the most effective way to respond to disasters is to work locally, purchasing needed supplies in country as near to the disaster as possible,” according to a Church news release Nov. 13.