It will face the reigning champion Los Angeles Galaxy on Nov. 3 in the first leg of the Western Conference semifinals. RSL looks to advance toward what would be its second MLS Cup in team history.

LA won two of the pair’s three meetings during the regular season, winning 2-0, losing 3-1 in Sandy and winning again 4-2 in California just more than two months ago.

The teams should engage in back-and-forth excitement in the tournament, beginning in the first game Sunday. Both have a shot at moving on. Only one will.

“They are the last champion,” said RSL midfielder Javier Morales. “They are a good team. They like to play soccer, so I think it’s going to be fun for everyone.”

Morales, key to Real’s aggressive attack on offense, hopes to be not only recovered, but back to full strength after suffering a recent ankle injury. Another three RSL contributors are questionable for the start of Sunday’s game: forward Joao Plata, defender Lovel Palmer and Robbie Findley will declare their status anytime in the next few days leading up to kickoff.

The return of Real defender Chris Schuler to the lineup for this matchup with LA gives Salt Lake a lift in the backfield. Schuler sat out the previous game between these clubs in August and watched as Galaxy veteran Robbie Keane notched three goals in the second half. Sunday will tell what Schuler’s presence does for Real, who faces LA in the playoffs for the third time in the last five years.

“I think that (Schuler) gives us just a little bit of a different dimension,” said RSL head coach Jason Kreis. “He gives us a player who can physically put a little bit of fear into forwards. That’s something we’ve lacked.”

“It’s a huge challenge and an opportunity for us to play an incredibly good team — a team that, when we played them this year, proved to be better than us,” Kreis said.

RSL and the LA Galaxy kick off on Sunday, Nov. 3 at 7 p.m. MT in Carson, Calif. The game will be broadcast live on ESPN from the StubHub Center. 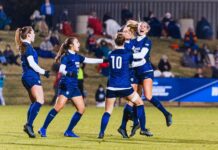