It was a wildcat showdown as the Cougars battled against the Loyola Marymount Lions and secured a 2-0 victory on Oct. 19.

“In the first half they were low pressure so I think we slowed down the game a little bit.” head coach Jennifer Rockwood said. “In the second half we couldn’t get lulled into anything and we needed to go and attack a little bit more”.

Erica Owens was tested several times in goal, but prevented the Lions from scoring several with solid saves including a leaping catch. Owens recorded five saves the first half and two in the second.

Fans gasped as Cloee Colohan took a hard ball to the upper chest, but Colohan shook it off to preform well throughout the rest of the match.

Colohan played aggressively along with Ashley Hatch as the two combined for nine shots during the second half. Colohan was the first to score for the cougars in the 59th minute of the game. Colohan finished a right cross and was assisted by Hatch and Rachel Manning.

“Nobody was marking for once in my life and I made sure to commit to my run,” Colohan said. “The ball was perfectly passed to me and we got it in.”

The second goal was scored by Ella Johnson during the 71st minute of the game. Marissa Nimmer kicked the ball in play from the corner and Johnson scored with a running header into the right corner of the goal.

The Cougars from handed LMU their 11st straight loss, dropping the Lions’ record to 3-12-0 and 0-4 in the conference.

“We’ve got a lot more players I think that are playing with a little more confidence as they attack the ball,” Coach Rockwood said. “Starting with Baylor we’ve gotten better with each of our last five games.”

The team’s momentum will be challenged as it gears up for a tough week. The Cougars will continue their quest for an NCAA tournament berth when they play face Gonzaga on Oct. 24 and No. 5 ranked Portland on Oct. 26, both at home field.

In support of breast cancer awareness, both the players and coaches for the BYU women’s soccer team wore pink. Fans were provided with a free pink bandana and the team were excited to support the cause. 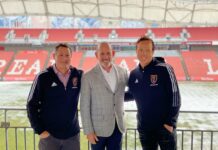