Whether you love them or hate them, these songs were a huge part of your childhood and constantly played either on your first generation iPod, Radio Disney or that ridiculously scratched CD in your gigantic boom box.

At one point in your life, you probably sat in the back of a minivan with your friends throwing up the famous “L” on your forehead. It was just what all the cool kids did. Now every time you watch “Shrek” or “Rat Race,” you still know every word to this song and secretly (or maybe not so secretly) want to throw that “L” right back up.

A true 90s kid has more than likely lost count of how many times they’ve asked someone to “Tell me whatcha want, whatcha really really want.” The Spice Girls were the goddesses of the 90s, with their own alter-egos (scary, posh, ginger, baby, sporty).

Spice Girls fans recently lost their minds when the group came out of hiding and made an appearance at the London Olympics, as the world screamed every word of every song at their televisions. And as time has passed, it seems as though everyone has aged but the Spice Girls.

Released in January 2000 as an opening to the new millennium, “All the Small Things” has to be included in every list of the best rock songs. The song was highlighted on one of what feels like 2,000 “Now That’s What I Call Music!” albums, so you know it was big.

And even if you don’t know every word to this song, you still know when to come in to yell, “Work Sucks!”

Annoying, repetitive, catchy music made up a large part of our childhood. But before “Cotton Eye Joe” and “Barbie Girl,” there was “Blue (Da Ba Dee),” a song no church dance has ever forgotten about. Why would anyone want a blue house with a blue little window and a blue Corvette?

There are so many boy band songs that could be on this list, but no song causes more raw, dramatic Karaoke emotion than “I Want It That Way.” Kids of the 90s always had their favorite boy bands, donning a ridiculous amount of baggy jeans and frosted hair tips.

There are so many other catchy songs from our childhood that were serious contenders for this list, but these five accurately portray the pop music that made us who we are. Some artists like Britney Spears were not included in the list because they still remain a part of our adulthood.

So from now on, don’t be ashamed to pop that “Now!” CD from 2000 into your car stereo and belt out some of these golden “oldies.” 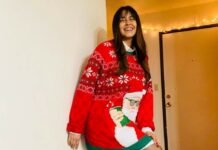 International students won’t be having a blue Christmas

The Festival of Trees provides festive way to help children