Increased speed limits have appeared all across the Utah interstate system and may be the reason for reduced traffic incidents, reduced commute times and a more consistent, safer flow of traffic. 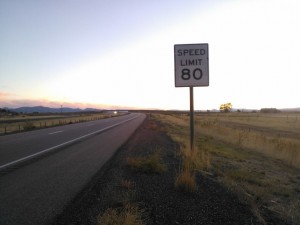 A bill was passed in the 2013 Utah legislative session allowing UDOT to conduct testing to find the optimal speeds in rural areas. The department discovered that most drivers drove at about 5–7 miles per hour over the regular 75 miles-per-hour speed limit anyway, and by raising the limit it encouraged drivers to keep a closer, consistent speed with traffic.

Studies of the testing 80 miles-per-hour zones revealed that there was a 20–30 percent decrease in speeding drivers. The test zones have been in place since December 2009, and the results point to safer driving and fewer traffic accidents.

The 80 miles-per-hour zones are found in rural areas on I-80 from the Nevada border to near Tooele, and on I-15 between north Leeds and Santaquin and Brigham City to the Idaho border. John Gleason, the UDOT media relations specialist, said that painstaking testing took place to make sure the speeds were optimal and safe.

“We looked at all speed-related crashes,” Gleason said. “All geographical concerns were analyzed to determine the best speeds in these specific, rural areas.”

Commuters have been pleasantly surprised by the implementation of the increased limits. Students traveling over Conference weekend were able to save time on the drive even with the increase of traffic.

“We got home at least half an hour sooner than usual,” said Kayli Butters, a senior in dietetics who had traveled to St. George. “There was hardly any traffic, and it was nice to settle into a regular speed.”

The speed limits in areas are still subject to change as UDOT continues its monitoring. Safety is their main concern.

“Increasing the limit has brought more people into compliance of the law and cut down on some of the speed-related crashes,” Gleason said. “But it’s a work in progress; much is guess work.”