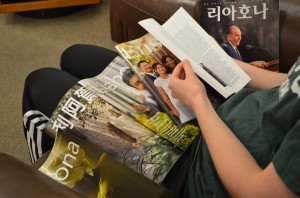 The Singh family wakes up early to make rice and curry. They get ready for their day, wearing their best clothing — mostly white shirts and jeans.

But they’re not getting dressed up for a wedding or family day trip. It’s all in preparation for The Church of Jesus Christ of Latter-day Saints’ semi-annual General Conference.

“Here in the U.S., you can just wake up, put on your pajamas, lay on the couch and watch Conference,” said Kevin Schade, an international relations major, who served a mission in India.

Schade said people in India, like the Singh family, can’t watch General Conference with the same ease and luxury many Americans enjoy. India is 11.5 hours ahead of the Utah time zone, so even a morning session of Conference would be broadcast to a mostly sleeping country.

“A lot of people have already read all the talks, and they come in and say, ‘Oh this talk is going be good!'” Schade said.

On the other side of the time zone exchange, many Church members set their alarms earlier than they would generally do so on a typical weekend. In Hawaii, live Conference sessions broadcast four hours earlier, but most Hawaiians don’t have to account for extra travel time to their church buildings.

“Now almost everyone has cable, and a lot of providers offer BYUtv, and they just watch it at home at early, early times,” said Kela Bello, a senior information technology major from Hawaii.

Translation difficulties also pose problems for non-English-speaking members, as some English words and phrases do not have direct translations in other languages. These obstacles are overcome by the Church’s translators, who simultaneously translate talks while Conference is being broadcast across the world.

Interpreters receive translated copies of speakers’ talks several days before the live broadcast, thus allowing them time to prepare, but they sometimes still have difficulties when it comes time for the live broadcast.

“It’s not so hard reading the talk as they’re speaking, but it’s keeping up with them when they’re speaking that is difficult,” said Cade Mellies, a Romanian translator and a BYU finance graduate. “It’s being able to simultaneously interpret when they break off of their talk or sort of ad lib.”

Mellies said members of the First Presidency and Quorum of the Twelve are the most common speakers to stray from their original talks.

“President Monson is probably one that will do it the most, because when he does it he’ll either tell a story that he was thinking of, or he’ll just have a quick idea that he wants to share,” Mellies said.

Mellies initially learned Romanian while on his mission, and he took 19 credit hours of Romanian at BYU after his mission. Mellies explained that some languages like Spanish and German are more common in Utah, and the Church has more translators that have spent years perfecting their language skills.