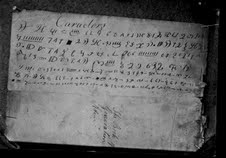 “It’s an excellent way to understand Joseph Smith and his life, because it gives you the pertinent documents, and it gives them to you in a chronological order, so you can see what comes before and after,” he said.
Some of the most significant information provided in the papers are details about the restoration of the priesthood, more information on how the Book of Mormon was translated as well as original handwriting samples of Joseph Smith.
Michael MacKay, Lead Historian and Editor of Documents Volume One, began working on the project in 2009 and recently began teaching at BYU as a Church History and Doctrine and Covenants professor.
“Basically every new document brings something new when it comes to church history,” he said.  “Our opportunity is to show the success of these papers to as many students as possible.  The classes I teach are based on these papers.”
The Joseph Smith papers have been apostolically reviewed and provides the information contained in the new version of Doctrine and Covenants, announced by the first presidency earlier in March.  Many of the changes include date adjustments in the section headings.  Institute manuals have also been changed because of the new information provided in these papers.
“Dates change everything,” said Dr. MacKay.  He explained that because of the more accurate dates, our insight into church history changes.  For example, in the past, church historians understood that Martin Harris had sold his farm as collateral so that he could make a profit from the publication of the Book of Mormon.   Because of the information gleaned from the Joseph Smith papers, historians now understand that section nineteen in the Doctrine and Covenants was given to Martin Harris before he was aware he would be repaid for the sale of his farm.
“Now we really see, this was a big act of faith for Martin Harris, we didn’t understand that aspect of this story before,” MacKay explains.
Kenneth Minkema, director of the Jonathan Edwards Center at Yale Divinity School, said the Joseph Smith Papers “will rank among the most significant projects in the history of American religion,” in the press release held earlier this week.
The second edition of the Joseph Smith papers is expected to be released in early December and will include documents produced in 1831-1833.  Ultimately, there will be 21 volumes when the project is complete.  The papers will be divided in to five sections: revelations, translations, histories, documents, legal and business records.
Dr. Mackay continues to work on the project as they continue moving forward in publishing the new information.  They are currently working on reading documents pertaining to polygamy in the early history of the church.  “This is just the first big wave of more changes to come.”