Thousands of students will welcome Fall semester with BYUSA’s “Don’t Fight the Fall” fest in Brigham Square this Friday, Sept. 13, from 7-11 p.m.

Fall Fest is an annual event to kick off Fall semester. Thousands of students will flock to Brigham Square and the Wilkinson Student Center Terrace to participate in the free event. Students can get in with their BYU ID cards and bring one guest free of charge.

Free food, as well as free activities like laser tag, inflatable obstacle courses, dunk tanks and dancing, will be available all evening. The highlight performance will be from Provo’s local band The Strike.

A new feature this year is the Zorb ball.

“It’s a hamster ball for humans,” said event lead Emily Stewart. “There’s a track that people can race on.” 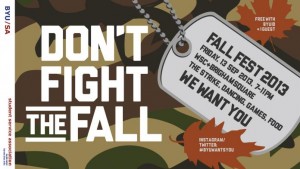 Anna Rasband, a freshman from Alpine, is looking forward to her first BYUSA event.

“I think it will be a fun event as long as a lot of people show up” she said. “I’m excited for The Strike, especially since it’s a free show.”

The theme “Don’t Fight the Fall” came from an idea to get students excited for the semester ahead. Stewart says she hopes this will be a good way for students to have fun before the stress of classes sets in.

“We brainstormed every possible theme we could think of, from nerd to glow stick to Hawaiian and everything in between,” Stewart said. “As we were coming up with slogans we decided on army because we could come up with lots of cool activities to go along with it.”

“The fest was planned completely by the students,” said Logan Mann, a student leadership coordinator. “It’s my job to make all their plans a reality and to plug in any missing parts.”

The Fall Fest has been in the works since the end of Winter 2013.  The event was requested, and a committee of eight students was formed to put plans in place. The majority of planning began during the summer term. Heavy advertising for the Fest began last week and will be promoted until the event itself. Camo signs with the slogan “Don’t Fight the Fall” can be spotted around campus.

Fall Fest committee members are preparing for a big turnout.

“Last year there were like 4,500, so we are expecting about the same, probably more,” Stewart said.