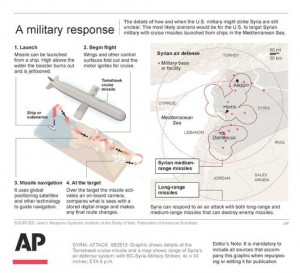 Debate over whether to attack Syria has erupted since Barack Obama announced on Aug. 31 his intention to strike military outposts of Bashar Al-Assad, the Syrian president who attacked Syrian civilians using chemical weapons.

Obama sought congressional approval for the Syrian strike, and citizens worldwide have influenced their government representatives to avoid taking action.

The U.S. Senate Foreign Relations Committee presented the guidelines for attacking Syria in a resolution. It was approved by the committee in a 10-7 vote on Sep. 4 and now awaits a yes-or-no vote by Congress.

The resolution indicates that such force is only allowed for the removal of weapons of mass destruction, such as the chemical weapons the Syrian regime allegedly used on Aug. 21. It also limits “boots on the ground” operations, declaring that no armed forces be on Syrian ground for combat. The administration has not revealed details of any air-strikes in the interests of national security.

Sen. Mike Lee of Utah announced his opposition to intervention in the Syrian civil war on Sep. 5. He suggested in a press release that the administration does not have an adequate plan for exiting the potential war, stating, “The U.S. would be required to become much more deeply involved in the Syrian civil war than the administration is willing to commit.”

With over 100,000 dead and over 2 million displaced, only neighboring countries in the Middle East such as Jordan, Lebanon, and Turkey bear immediate burdens of the civil war. The use of chemical weapons alarmed the United States to the potential for terrorism, but many Americans, including Lee, do not feel threatened.

“There really isn’t that much of a point behind these attacks,” said Mike Godfrey, president of BYU’s national security journal Praemon. At the same time, Godfrey acknowledged that Syria’s chemical weapons may proliferate to other countries. “Syria probably won’t transport anything to Iran or proxies, but who knows, they could.”

Lee joins the public base in his opposition to a military strike. Reuters and Pew Research polls from the week preceding Obama’s announcement both indicate a mere 29% public approval for Syrian intervention. In an exercise of civic engagement, the public has overwhelmed congressmen with letters and emails that sum to a resounding “No!”

Congressmen heard the voice of opposition and responded, much to the administration’s dismay. Some Republicans who initially supported some kind of action have changed their minds, including Rep. Michael Grimm of New York, who decided to oppose the plan to strike on Sep. 5.

The public across the world has decried striking Syria. One notable paradigm for interventionist opposition comes from the U.K. Prime Minister David Cameron, who believed he could draw up support to back an American strike, but Parliament struck down the option of attacking Syria on Aug. 30, arguing that the Syrian civil war didn’t affect the country.

Other countries are also wary of backing an American strike, with the exceptions of France and Turkey. Turkey, which neighbors Syria and houses thousands of Syrian immigrants at its borders, can lose a lot from aiding a strike.

Coby Vail, a BYU graduate living in Istanbul, Turkey, explained that Turks view the Obama administration’s intentions with much skepticism. While its citizens are deeply worried about an attack, its government gives overt support for an American strike. “The government has invested a lot and wants to see the Assad government fall,” Vail said.