SPRING, Texas (AP) — A fight inside a Houston-area high school escalated into a series of stabbings Wednesday that left a 17-year-old student dead and three others wounded, sheriff’s officials said. 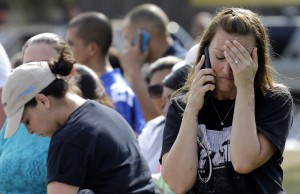 The stabbings happened during a fight between several students in a school corridor. The Harris County Sheriff’s Department said 17-year-old student Luis Alonzo Alfaro pulled a knife during the fight and fatally stabbed one student and wounded three others.

Alfaro admitted to the stabbing under questioning by homicide detectives and was charged with murder, the Sheriff’s Department said Wednesday evening in a statement.

Alfaro is booked into a Harris County jail with bail set at $50,000.

A preliminary court hearing is scheduled for Friday. Online court records list no attorney for Alfaro. A telephone call to a number listed with his home address connected to a fax machine.

Authorities provided few details on what may have led to the fight, and no other information was available on the teenager who was killed.

“We believe a confrontation of some sort occurred … that ultimately led into a physical confrontation that produced weapons,” Sheriff Adrian Garcia said. “There has been some information that this may have been gang-related.”

School district officials canceled classes at the high school for the rest of the week.

Some parents said the fight was the continuation of a disturbance that broke out Tuesday. Officials at the school, which has about 3,500 students, would not confirm their comments.

“Every parent sends their child to school believing school should be one of those safe haven places,” Spring Independent School District Superintendent Ralph Draper said. “This is what we spend our nights and days working toward and what I lose sleep over.

“In my nearly 30-year career, this is the one thing you pray never to experience.”

Parent Tara Campbell said she received text messages from her daughter about the fight and that her daughter said students who witnessed the episode snapped cellphone photos of the victims as they lay on the ground.

Campbell said she intended to have her daughter home-schooled, saying she’s grown tired of fights at the school.

“Last year there were gang fights consistently,” she said. “This is ridiculous. This is an ongoing situation.”

Lakesia Brent said her son, a sophomore at the school, sent her multiple text messages asking her to come pick him up.

“He’s just afraid,” she said, adding that fights at the school were a problem in the last academic year.

The school was placed on lockdown following the stabbings, which occurred about 7 a.m., and students were released to the care of their parents later Wednesday.

Many parents were upset that the school district did not provide them information in a timely manner.

Draper defended the district’s actions, saying they focused on two goals — securing the school and making sure no action was taken to compromise the investigation — before communicating information to parents about what had happened. He said students were not immediately released because some of them were potential witnesses who needed to be interviewed by investigators.

“When street violence pours into the school, it compromises the safety of all our students,” Draper said.