On Aug. 27, 1973, 157 first-year law students, along with the newly hired dean and faculty of what would become the J. Reuben Clark Law School, filed into the de Jong Concert Hall at the Harris Fine Arts Center for the ceremonial first class of what would eventually become one of the most prestigious law schools in the country. 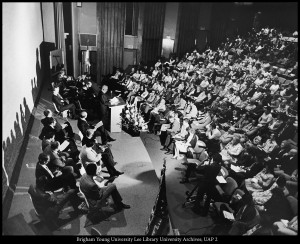 “Because you are the first, you will be, as a group probably more widely known than any other class,” then-President Marion G. Romney said during the ceremony. “You have been admitted for your superior qualifications. Appreciate your opportunities; make the best of them. Set a high standard for your successors to emulate.”

Fast-forward 40 years. President Romney’s vision has been realized through the success and contributions of many of those from the charter class, which launched some of today’s most prestigious legal professionals. Of the 157 students, there have been federal, state and local judges, senior partners in many prominent law firms, mayors, legislators, general authorities, general counsels of federal agencies and private corporations, prominent lobbyists, an Assistant to the President of the United States, numerous mission presidents, executives, chief executive officers and successful entrepreneurs.

“The entrepreneurial spirit of a group of men and women who chose to come to a law school that was not accredited has left an extraordinary legacy for the institution,” said James Rasband, current dean of the law school. “I think it is partly because they made a sacrifice to come not knowing what would happen to the law school in the long run. They have been rewarded for that sacrifice, because I think the law school has turned into a great institution, where the value of their degree has been appreciating after that since their graduation.

“Nevertheless,” Rasband continued, “these were the risk takers that created our foundation and they have gone on to just extraordinary success. I don’t know the number precisely, but if you were to look at the number of federal judges and prominent partners and others who are involved in policy and government in every way, it really is quite a legacy”

Lending credibility to both Romney and Lee’s comments, Dave Fischer, a member of the BYU charter class and former special assistant to Ronald Reagan said, “Knowing that the class stars had multiple offers from prestigious law schools, I realized that there were some pretty brilliant minds in that charter class. It didn’t take long to identify those that would become members of law review. … We were pioneers of sorts, the kind that legends are made of. From humble beginning sprang forth greatness and remarkable achievement.”

In honor of the law school’s 40th anniversary, The Universe caught up with three of the charter class’ most successful alumni.