Locals feel a growing excitement about Provo that is being attributed to a good economic climate, a burgeoning music scene and rapid downtown revitalization — and organizations compiling national rankings agree.

“I kind of can’t believe I’m saying this, but this is really a hot place to live right now,” said Kayla McAdams, a three-year Provo resident. “I have out-of-state friends who are super jealous about the live music I get to hear,” McAdams said. “Between Google Fiber, the construction happening downtown and the entertainment vibe, Provo is actually starting to get noticed by people in other places.”

McAdams believes part of that attention is due to projects like the new Manhattan-style 63 Center luxury shopping, dining and living space as well as many up-and-coming Provo bands like The Strike.

Often described as “the next big thing,” the nine members of The Strike offer a funk-pop sound with jazz undertones, complete with horns and a featured saxophonist. Lead singer Chris Crab and his gang crooned, rocked and swayed their way into the hearts of spectators this summer, eventually winning the chance to be the warm-up band for this year’s Stadium of Fire headliners. Hoping to repeat the success of other Provo-originated bands, such as the highly successful Neon Trees and Imagine Dragons, The Strike is poised to claim the new limelight and put Provo on the national music map.

Crabb believes there is a distinct reason Provo is a new trendsetting music mecca.

“Provo is drawing young adults from everywhere partly because of the size and scope of the LDS Church world-over and young people who are coming to BYU,” Crabb said. “A lot of us grew up developing musical abilities in our home towns or countries, but there’s something about being uprooted and starting your life over in a new place … mixing in, making connections, seeing how talents blend together. … It fosters incredible creativity.”

Even so, an explosion of successful bands from the area is just the tip of the iceberg. In July, Businessweek ranked the Provo-Orem economy first out of the 102 largest metropolitan areas in the United States, citing home values, retail activity and job growth, among several other factors. The Frontrunner has provided a high speed public transportation alternative for hundreds of Salt Lake commuters since December. Within months, Google Fiber will redefine fast internet for residents, who will be benefit from speeds up to one hundred times regular broadband along with only two other pilot cities — Austin, Texas, and Kansas City, Mo.

Provo’s appearance on top of national lists such as National Geographic Adventure’s “Where To Live & Play,” and Forbes’ “Top 10 Places to Raise A Family” has given the city’s profile enough lift to expand its marketing message for businesses catering to young people and that are interested in the recreation industry. 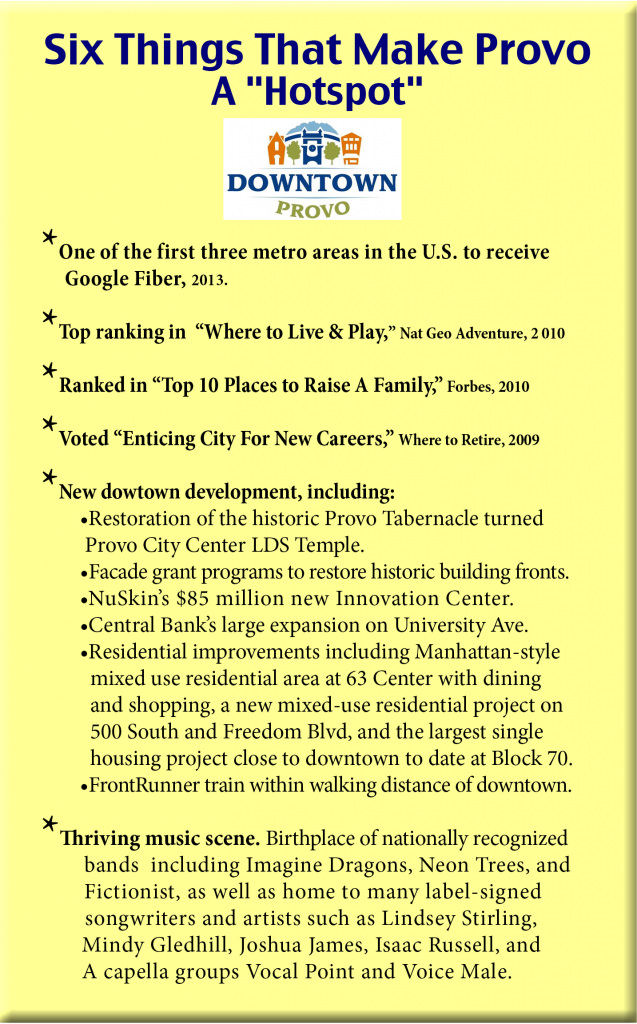 Provo Mayor John Curtis believes his city is ready to come into its own and explained that with many national rankings comes a change in image that the downtown redevelopment projects have helped create.

“You don’t have to look far to see on every corner of downtown — things are happening,” Mayor Curtis said.

Speaking at a groundbreaking ceremony at 63 E. Center in June, Curtis described some of what Provo has been recognized for in recent months.

“This past year the city of Provo has had many accolades including ranking first as most optimistic city and being listed as the country’s eighth most livable downtown,” Curtis said. “This implies that there are places to live downtown, so this step is vital. This mixed use building is a great kick-off to this next phase. If you haven’t been to downtown Provo lately, come check it out.”

The new high-end Manhattan-style apartment, shopping and dining complex Curtis described will soon be rising in the gap on east Center Street next to Los Hermanos, and will be known simply as “Sixty-Three.” Forge Development is building Sixty-Three as a luxury “high-rise” with 41 spacious apartments, two rooftop lounging areas and family living spaces with 12-14 foot ceilings.

City planners believe the vision of Sixty-Three fits well with the overall goal of developing existing areas that have a strong sense of place rather than creating more sprawl. Forge Development owner Ryan Freeman said that his new building will be a good fit for those who desire an upscale living experience within walking distance of other city expansions such as the new Provo Recreation Center, the soon-to-be-completed Provo City Center LDS temple and the FrontRunner train services.

“Coming up with the right mix of uses for this space has been two years in the making,” Freeman said. “We needed to be able to see well into the future. … We wanted to set a new standard in Provo.”

Freeman agreed that there is a good climate for capital investments in the city with all of the encouraging changes in Provo lately.

“I believe this building is only the first in what will be a great groundswell of growth in downtown,” he said at Sixty-Three’s groundbreaking ceremony.

Provo City Council chairman Gary Winterton also spoke at the groundbreaking, describing the goal of having “walkable neighborhoods” in Provo, while explaining the significance of this new type of structure for the city.